Tony Allen: An Autobiography Of The Master Drummer Of Afrobeat

By CHRIS BECKER
October 6, 2013
Sign in to view read count 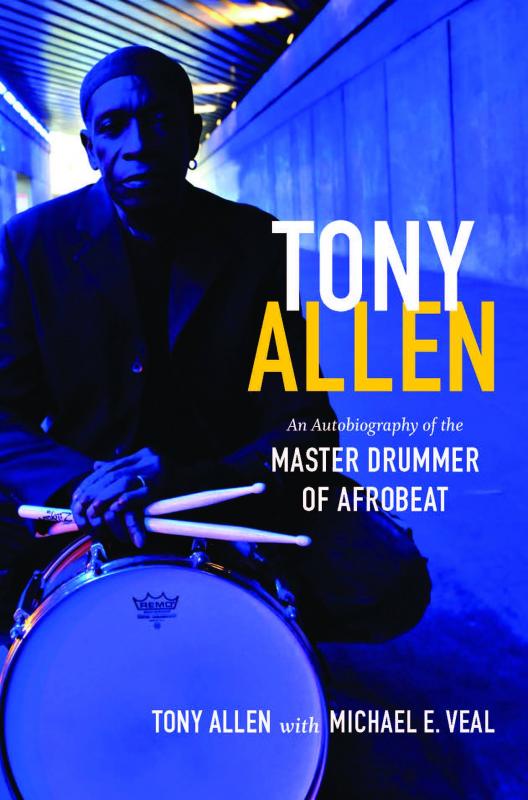 First of all, drummers are going to love this book. With so few autobiographies of drummers in print, the publication of Tony Allen: An Autobiography of the Master Drummer of Afrobeat is a cause for celebration. Co-author Michael Veal, author of Fela: The Life and Times of a Musical Icon and an accomplished musician himself, brings to life the rhythm and emotional timbre of Tony Allen's speaking voice and the complex story of this singular, Lagos-born-now-expatriate musician in a first-person narrative that takes the reader through a particularly transformative time in West Africa's post-colonial history. Most importantly, the book is a hell of a lot of fun to read, although Allen's first-hand accounts of his struggles with shamanistic bandleader and Nigeria's adopted "black president" Fela Anikulapo-Kuti will piss off any musician who has had to fight to get paid for playing a gig. And Allen's chillingly matter-of-fact recollection of the aftermath of the 1977 military raid on Fela's "Kalakuta Republic" compound, a raid that involved beatings, rape, mutilation, and nearly burning the compound to the ground, is truly terrifying.

Afrobeat, a musical genre that Veal describes as Nigeria's "sonic signature," was born out of Allen's mastery of what he describes as "a fusion of beats and patterns," including highlife, rumba, mambo, waltz-time, traditional music from Nigeria and Ghana, American R&B and funk and, not surprisingly, jazz. On Allen's first U.S. tour with Fela's band Koola Lobitos, a band that would be renamed Africa 70 upon its return to Nigeria, Allen heard and met drummer Frank Butler, who played drums with such musicians as Duke Ellington, Miles Davis, and John Coltrane. Allen cites the drumming techniques he learned directly from Butler as "the final piece of the puzzle that just made everything catch on fire."

And catch on fire it did. In his vivid description of Allen's drumming on the track "Fefe Naa Efe" from Fela and Africa 70's 1973 album Gentlemen, Veal writes: "Like the great jazz drummers, (Allen) keeps a steady conversation with the other instruments, particularly the soloists...Like a great boxer, he knows when to jab with his bass drum in order to punctuate a soloist's line, when to momentarily scatter and reconsolidate the flow with a hi-hat flourish, when to stoke the tension by laying deeply into the groove, and when to break and restart that tension by interjecting a crackling snare accent on the downbeat."

The book not only reveals Allen's methodical, years-long development of a new way to play the drum kit and propel Fela's compositional and political vision, it also shows Allen never stopped developing his technique post-Fela and continues to bring "the vitality of Yoruba artistic creativity" into new and innovative creative contexts. Allen negotiated the "world beat" market of the 1980s and 90s and experimented, like many African musicians recorded during those years, with heavily electronic and dub production techniques. In recent years, Allen has recorded and performed with American, French, and British musicians from genres that may seem light years away from his highlife roots. He saves some of his highest praise in the book for Damon Albarn, formerly the lead singer and bandleader of the wildly popular British band Blur and who has collaborated with Allen on several projects. "The way Damon came into my life," says Allen, "it was kind of like it had been written...not only did this guy make a big difference in my career, but we are also very good friends."

After many years of being underpaid and under appreciated for his innovations, Allen is currently enjoying a creative renaissance. One of the most moving passages in the book comes toward the end when Allen, now in his 70s, describes how busy he is "touring all over" Europe and what drives his creative work ethic. "I still want to play something impossible," Allen writes, "something that I never played before."