By REX BUTTERS
January 9, 2004
Sign in to view read count 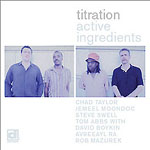 “Song for Dyani” establishes the group identity with Taylor playing with three hands and Abbs happy to keep up with his pace. Swell and Moondoc play an easy theme sounding old yet futuristic, their leisurely pace at odds with the hurricane rhythms. Moondoc finds plenty to do while soloing, and the tune fades out with Swell wailing. Starting slow and serious, “Velocity” becomes a casually daring field of solo for Moondoc and Swell.

On “Slate” Taylor’s drum set sounds like it’s being played by a hail storm. Moondoc blows wild and personal with Swell and Mazurek adding color with head charts. “Visual Industries” has Taylor and Abbs running like Godzilla’s coming. Their manic pace contrasts with the theme unison played lazily by Swell and Moondoc. Everything stops for a bowed Abbs solo broken by the others returning with the Ornetteish theme. Moondoc sets blues and small moody thoughts against his raging rhythm section.

Abbs starts “Modern Mythology” with a solid, straightforward bass line. Taylor joins on hand drum, then Moondoc leads Swell and Rob Mazurek in a discreet hunting theme that busts open with Moondoc repeating a line similar to “A Love Supreme.” Taylor’s drumming keeps it humid, until he switches to sticks during Moondoc’s solo. The band clicks into group improv before restructuring for Mazurek and Swell’s extended duet. Both players respond to Moondoc’s calls on “Titration,” eventually playing unison until Moondoc and Swell explore together over the tumultuous rhythm section. David Boykin takes it down and plays it sweet, but once the tempo comes back Boykin urges the band through a stellar regions flight. The piece resolves with a solemn horn arrangement.

Active Ingredients has turned in an impressive debut. Amidst the many projects to which these musicians contribute, hopefully this group will become a priority.