By KEN DRYDEN
September 6, 2008
Sign in to view read count 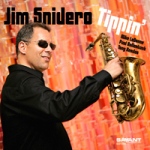 Since graduating from the University of North Texas in 1981, Jim Snidero has worked for many different bandleaders, including Toshiko Akiyoshi, Frank Wess, Brian Lynch, Tom Varner and Walt Weiskopf, though his first professional gig after moving to New York was with organist Jack McDuff. This year-long stint provided the alto saxophonist with a heavy dose of blues, which proved to be a valuable post-graduate on-the-job education.

Tippin' marks Snidero's first time adding organ to his own band on a record date and there's hardly a better choice than Mike LeDonne, an old friend who started as a pianist but developed into one of the top players on the instrument. Snidero's quartet is rounded out by guitarist Paul Bollenback (also a McDuff alum) and drummer Tony Reedus, two first-call musicians who stay busy.

Snidero arranged several standards for the date. The upbeat treatment of "The More I See You" is an easygoing swinger that will get feet tapping. The leader's soulful side comes out in the poignant "Lover Man," though he inserts a few rapid-fire Charlie Parker-like runs to keep the mood from becoming overly maudlin. Bollenback's fluid but understated solo is a highlight of a burning "Alone Together."

The bulk of this session is devoted to originals. LeDonne contributed the challenging modal piece "Young Like," a turbulent tribute to the late organist Larry Young that sets the band on fire. Snidero's loping "Let's Be Frank" is a tribute to Wess and has the swinging lyricism that was a trademark of the tenor saxophonist's charts for Count Basie. The leader's brisk title blues is in the spirit of McDuff, while his hip blues "Fried Oysters" provides a perfect close to this outstanding release.

Tippin'; Let's Be Frank; Young Like; The More I See You; Lover Man Oh Where Can You Be; You Stepped Out Of A Dream; K2; Alone Together; Fried Oysters.