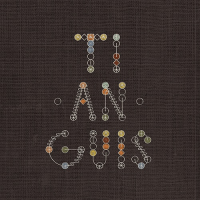 The album features eleven folk songs originating from locales as distant as Eastern Europe, sub-Saharan Africa, South America and Central America. However, the interpretations of these musical traditions undergo considerable transformations as each member of ti-an- guis applies his/her own conceptions and styles to the tune. The final products are sonically unique melting pots of folk and world music traditions embodied within tight orchestrations and arrangements.

"Ederlezi" comes from the Roma musical tradition, and is given an intriguing treatment by ti-an-guis. The song begins with a complete unaccompanied melodic exposition by Holjevac. Understated nylon string guitars and bass accompany the next iteration of the melody, but the final iteration with the full orchestration is vigorous and aggressive. It's an effective and exciting development of the already captivating tune.

The Croatian tune "Ljubav Se Ne Trži" sounds like a dance piece in cut-time, but the arrangement fully exploits all of the potential instrumental combinations. These range from heavily percussive textures featuring strummed guitar to vocal melodies doubled by the guitar (and then the bass) to instrumental solo sections.

"La Ma Deco" is one of the most beautiful melodies on the album, originating in Afro-Brazilian tradition. The melody is sung in chorus and accompanied by lilting guitar work and the evocative timbres of various hand percussion instruments. While the previously mentioned songs are energetic and effusive, "La Ma Deco" displays how sensitive and effective the musicians can be in a ballad context.

The album's diversity does not detract from its cohesion or power. The success of ti-an- guis' interpretations is a welcome demonstration of the potential for creative music in this increasingly small world.