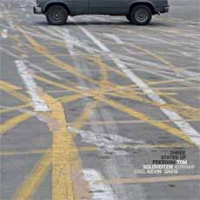 Eddie Prevost's improvisation workshop has been meeting weekly in London since 1999, with several hundred participants having attended. In that time, some of its long-standing participants, such as saxophonist Seymour Wright, guitarist Ross Lambert and pianist Sebastian Lexer, have built up considerable performance histories and discographies.

Lately, there has been an increasing trickle of releases from newer workshop participants such as guitarist James O'Sullivan, French pianist Marjolaine Charbin and Greek zither player Dimitra Lazaridou-Chatzigoga. To that list, we can now add Israeli saxophonist Tom Soloveitzik, who attended the workshop while he was studying at the London College of Communication, only stopping when he went back to Israel at the end of 2011.

Three States of Freedom was recorded in Jaffa in June 2010 during a tour of Israel by the trio of Soloveitzik plus American-born cellist Kevin Davis and, on computer and controllers, Korhan Erel, of Turkish free improvising group Islak Köpek. Soloveitzik had met and played with the other two when he visited Istanbul in October 2009, a meeting that led to the tour and this recording. Given the diverse nature of their instruments, the three work well together as a trio. None of them hogs the limelight, all three seemingly more focused on the overall ensemble sound, with each occasionally rising to the surface, supported by the others.

At his workshop, Prevost always emphasizes to participants the importance of listening to those they play with and of exploring what their own instruments can do. On the evidence of all seven improvisations here, all three members of the trio have heeded those instructions but none more so than Soloveitzik; he hardly ever plays like a jazz player, instead using his instruments to produce whatever sound is most appropriate at a particular moment. As on "Chamesh," this can involve sustaining a single note to underpin the playing of his colleagues or interjecting the occasional single staccato note to punctuate proceedings. At other times, he will strike the bell of his saxophone with metal objects to produce percussive sounds. Such invention and variety are also displayed by both Davis and Erel, ensuring that Three States of Freedom has plenty to reveal to those who return to it frequently.