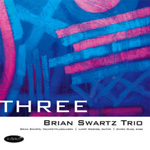 Trumpeter Brian Swartz came up with an interesting concept for this album. Going back to 1979, he cites a series of four albums by Chet Baker made for the Steeplechase label (The Touch of Your Lips, Daybreak, This Is Always, Someday My Prince Will Come) with with a trio that eliminated both the drummer and the pianist. Baker was known for having a preference for drummer-less small combos. The sidemen for these dates were guitarist Doug Raney (son of Jimmy Raney) and bassist Niels-Henning Ørsted Pedersen. Later sessions continued in this tradition with guitarist Philippe Catherine and bassist Jean-Louis Rassinfosse.

Originally from the Midwest, Swartz was the son of an Air Force father and consequently had many forwarding addresses. After settling in the Los Angeles area, Swartz established his own group in 1996 and became a well-known musician there. He also worked with Red and the Red Hots, a popular local swing band, performed at the 1999 Playboy Jazz Festival, and acted as a contractor for the Tom Harrell Big Band. Swartz has also accumulated a large list of collaborative relationships over the past decade. His two previous albums, There's Only Me (Noir, 2000) and Live At The Jazz Bakery (Summit, 2005), have both met with positive reception.

The choice of two well-regarded musicians, guitarist Larry Koonse and bassist Derek Oles, also helps to solidify the finished package of Three. Koonse proves a nimble soloist and is always there to provide the chorded comping for Swartz. As per his many recordings, Oles contributes solid bass accompaniment.

Without slavishly copying the style of Chet Baker (Swartz does not sing), this album works well to create the same ambiance as the aforementioned Steeplechase recordings. All of the tunes are not from the Baker songbook; Swartz provides four originals that fit right into the album's setting. The group can play it up-tempo, as on Harold Arlen's "My Shining Hour" or Irving Berlin's "The Best Thing For You Is Me," or do ballads like Frank Loesser's "I've Never Been In Love Before" or the Victor Young classic "A Ghost of A Chance," initiated by a Oles bass solo. On the John Golden standard "Poor Butterfly," Swartz plays the verse before the group joins in for the melody statement.

Samba de Outono; I've Never Been In Love Before; My Shining Hour; Mi Sonita; I Thought About You; Emily;' A Ghost Of A Chance; Out Of View; Poor Butterfly; The Best Thing For You Is Me; HOw Deep Is The Ocean; Father To Many.