The Who: The Official History

By DOUG COLLETTE
January 17, 2016
Sign in to view read count 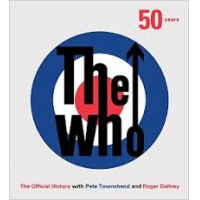 The explosive dynamism of The Who on stage, at the peak of their career, was so intense it had to be seen and heard live in the moment to truly appreciate it. Even so, the intensity was so great that more than enough of it translates to the photographs within The Who: The Official History to make this heavy hardcover an eye-opening experience.

And its not just the concert photos either. The mix of images ranging from the band's childhood and adolescence, the Who's early career on and off stage, plus other candid shots such as those of managers Chris Stamp and Kit Lambert, as well as reproductions of memorabilia, become almost dizzying. The integration of Ben Marshall's text within the unpredictable logic of the ten by eleven-inch book's layout, thus turns the perusal of this heavyweight hardcover as joyfully exhausting as it is academically exhaustive.

More than simply a chronological scenario of the Who itself, The Official History rightly includes personal and cultural background to frame the evolution of the group. So, the story of the Mods and Rockers becomes an overriding theme permeating not just the early years of the Who, but the sequence of events involving the gestation and creation of Quadrophenia(MCA, 1973). Likewise, while it seems almost startling to see a chapter titled "Hippies" here (these four were anything but), the paradigm shift of values occurring around the time of Tommy (MCA, 1969) echoed through its music and subsequently in the future composition of Pete Townshend that would eventually become Who's Next (MCA, 1971).

In fact, as these three-hundred twenty pages turn toward the latter chapters, where the titular leader and vocalist Roger Daltrey persevere in the wake of the deaths of drummer Keith Moon in 1978 and bassist John Entwistle in 200, their loyalty to the legacy of the Who becomes an abiding and honorable enterprise. The surviving duo make no pretensions the latter-day band compares to the original quartet; rather, their honest and respectful approach to their discography, combined with their bittersweet homages to their deceased comrades, becomes potent as a pragmatic reminder of the enduring power of their music, both to to long-terms fans and newcomers for whom even the two survivors are more symbolic myths than living breathing artists.

With the detailed and up-to-date discographical section near the end, The Official History thus becomes a printed corollary to the career of the Who right up to the present day and, in fact beyond: Townshend's good-humored footnote referencing future updates of all the information here, based on the perceptions of the last standing member of the quartet, is totally bereft of the bitterness that once pervaded his outlook. On the contrary, it's a statement of wizened and good-humored broad-mindedness, the likes of which any true lover of rock and roll would want to receive from their musical hero(es).

The Who Book Reviews Doug Collette