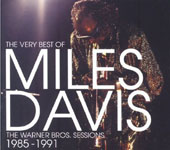 Miles Davis' final decade was filled with controversy. Accusations of "sell-out became even more vehement in 1985 when, after thirty years with Columbia, the late trumpeter jumped ship and signed with Warner Bros. That said, he issued two highly successful studio albums, participated on two soundtracks, and hit the road hard with a series of must-see groups that were consistent only in their ever-shifting line-ups. Miles also did the unexpected by revisiting his '50s work with Gil Evans at the 1991 Montreux Jazz Festival.

The Very Best of Miles Davis: The Warner Bros. Sessions 1985-1991 represents a comprehensive cross-section of material from the seven years prior to Miles' death. An engaging listen, it sheds more positive light on the posthumous and almost universally reviled '92 release Doo-Bop The go go-ish "Mystery, deeply funky "Chocolate Chip and soulful "The Doo-Bop Song all seem less objectionable with the luxury of distance. Miles' playing is strong, and the album might well have been better were it not for Easy Mo Bee's vapid lyrics.

Tracks from his two collaborations with bassist/multi-instrumentalist Marcus Miller still sound fresh, despite some dated synthesizer textures. The slinky title track from '85's Tutu and, in particular, the three pieces from '89's Amandla ("Catembé, "Mr. Pastorius, "Amandla ) are inspired choices, although Tutu's "Splatch could have been replaced with better choices like "Tomaas or "Portia.

Miles' two soundtracks—'87's Siesta and '90's Dingo—were largely uneven, although the two tracks included are good choices. Dingo's "Trumpet Cleaning is a big band blues reminiscent of a brighter, more buoyant "All Blues. The two other large ensemble tracks ("The Pan Piper and "Summertime ), from the '91 Montreux performance, are in turns ethereal and coolly swinging.

The collection ends with three tracks from '96's Live Around the World. Featuring saxophonist Kenny Garrett and lead bassist Foley—the two constants with Miles' '88-'91 touring bands—these groups may not have been as interactive as those that came before, but the emergent Garrett was always a vibrant soloist while Miles clearly remained in fine form to the very end.

If there's any criticism it's the lack of unreleased material. With the last-minute cancellation of the multi-disc The Last Word box set a few years ago, surely something from the legendary "lost Rubberband could have been included. Still, The Warner Bros. Sessions 1985-1991 is a good representation of available material, with well-written liner notes by trumpeter Wallace Roney that don't pull any punches. There's nothing new to offer those who have the original material, but the compilation does contextualize Miles Davis' final days, proving that increasing ill health did little to dampen his musical spirit.