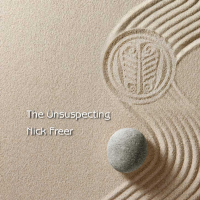 The euphonious start to "Glyph" on The Unsuspecting gives no clue as to the surprising guitar solo that ensues. This surely is Allan Holdsworth, no? Actually it isn't. Australian guitarist Nick Freer is an unashamed devotee of Holdsworth. He's currently embarking on a PhD entitled The Improvisational Process of Guitarist Allan Holdsworth: Ontology and Analysis of Selected Works at Monash University's Faculty of Arts in Melbourne. But crucially, here's someone who can not only talk the talk, but also walk the walk. It would be invidious to suggest that he can play at least as well as Holdsworth, but within the context of Holdsworthian shredding, Freer is most definitely up there with the best.

A breezy muted electric violin-like sound, presumably emanating from a synthesizer, opens "Heavy the Crown" (dedicated to Allan Holdsworth), followed by a luxuriant tenor sax solo from Carlo Barbaro and Freer soloing with unfettered fluency punctuated by some majestic chords and tenor tracing out the melody. On "Darwinism" the guitar is omnipresent from the beginning, with high register notes played at an even higher speed. The bass driven "Wayland" invites more precocious guitar from Freer, replete with feedback and rapid gear changes.

ADVERTISEMENT
"The Pall" ushers in a distinct change of pace and tone with Freer on acoustic guitar backed by the full band and again tenor saxophone leading the melody. The guitarist evinces a subtler style of soloing but no less riveting. The intro to "Jazz Apostasy" is led by synthesizer and drum stutter effects before an explosion of legato-rich guitar. The repeated prog-rocky riff on "Telepathy" is a clue to the nature of this track which is nearer to Soft Machine era Holdsworth than anything else on the album. But the entire recording steadfastly retains its own identity ubiquitously embellished by cascades of notes rolling down in prestissimo waves.

"Wayland Abstractum (Do Not Look Up)" is a short (under two minutes) bridging track leading into "Delusion," a more reflective piece, contrasting with the preceding more frenetic tracks, but which nevertheless still manages to include more lightning fast guitar. The final, title track, opens with dramatic rock chords but progresses with the aid of a synthesizer and sax melody, facilitating further electrifying, death-defying extemporization from Freer. This really is an extremely good recording and an excellent example of fusion played with aplomb and imbued throughout with compositional intelligence, particularly given that this is Freer's first album as bandleader. This guitarist's guitarist is gifted with phenomenal technique and indubitably warrants considerably more international exposure.

Glyph; Heavy the Crown; Darwinism; Wayland; The Pall; Jazz Apostasy; Telepathy; Wayland Abstractum (Do Not Look Up); Delusion; The Unsuspecting.