The Doors: The Singles 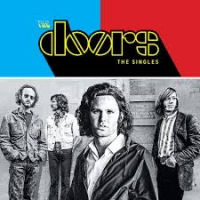 Naysayers carping about the voluminous reissues of the Doors catalog conveniently forget to consider neither label nor management would proceed on a title like The Singles if there wasn't sufficient confidence the market, in terms of new audiences alone wasn't there to support sales. And say what anyone will about how dubious is the concept of this latest release, it serves a dual purpose: debuting tracks heretofore unreleased on CD (most on the second disc here, not surprisingly rendering it somewhat more of a treasure trove ) but more importantly, reminding just how commercially successful this band was, on its own terms and in comparison to peers such as Cream and Jefferson Airplane.

True collectors will no doubt want the vinyl 7-inch singles compilation released simultaneous with this double compact disc set, but the track sequencing of the latter carries an intrinsic satisfaction, not just in terms of hearing the music but also in appreciating the creative progression of the Doors during the course of their history. A total of forty-four tracks carry a listener from the explosive debut to the questionable commercialism of The Soft Parade (Elektra, 1969 through the post- Jim Morrison period of Other Voices (Elektra, 1971).

The Doors The Singles goes even further beyond that initial posthumous period with the elegiac likes of "Albinoni: Adagio" a classical favorite of the group's frontman and, as is wholly appropriate, documents the band's work on the concert stage. The randy likes of "Gloria" has its purpose, though hardly so much so as the inclusion of the de rigeur but perpetually potent opener "Roadhouse Blues," and there's also a bonus track in the form of a concert version of "Moonlight Drive," during which the lead vocalist/poet/lyricist appends "Horse Latitudes," both originally part of the group's second album, Strange Days (Elektra, 1967).

The cut appear not just chronologically, but in order of 'A' side and 'B' side of the 45-rpm assignments, the earliest of which, up to and including "The Unknown Soldier" are in pure but deep monaural sound. Stereo mixes of entries beginning with 1968's "Hello, I Love You" do have a magnified presence compared to previous reissues and that advance no doubt has more to do with engineer Bruce Botnick's work, both at the time of his original engineering of the Paul A. Rothchild-produced recordings as well as in prep of this package.

Yet in this very day and age of single speaker devices, the four bonus tracks here -"Hello I Love You," "Touch Me," "Wishful Sinful" and "Tell All the People"-have their attraction beyond their previous absence from compact disc. In these radio versions, the level of detail in the sound is startling, while the breadth and depth of sound belies its mono reproduction, an impressive effect not at all dissimilar from that arising from hearing The Beatles' latter-day catalog re- releases.

The full array of pertinent detail appears in a somewhat garish package design, but as is the Rhino Records label's usual practice, all the particulars are readily accessible and readable here, including credits for the additional musicians that accompanied the Doors during their studio sessions. For instance, Elvis Presley's bassist Jerry Scheff appeared on LA Woman along with rhythm guitarist Marc Benno so the band could record essentially live with minimal overdubs. In addition, there's clear notation of the various distinctions of the aforementioned B-sides: "Who Scared You," appeared in March 1969 as the flip-side to "Wishful Sinful," and a cover of Willie Dixon's "(You Need Meat) Don't Go No Further," (sung by keyboardist Ray Manzarek in a nod to blues roots)was paired with the 1971 smash "Love Her Madly." (and also appeared on the first collections of Doors material released after the death of Jim Morrison Weird Scenes Inside the Goldmine (Elektra, 2014)

This package of The Singles, in addition to the two CD's, contains a value added component (and perhaps a future marketing ploy) in the form of a Blu Ray disc with a 1973 Quadraphonic mix of The Best of The Doors. It's admittedly a rarity perhaps aimed only at completists, but there is some allure for techies, too both in terms of the configuration itself (combined with the comprehensive remastering) and the sonics of a once vaunted but ultimately failed form of sound reproduction (the precursor to home theater?). This item may or may not generate the multiple ripples of dialogue on social media concerning the aural superiority of these single mixes compared to prior compact disc mixes, but it's well to remember at the time of original issue, there were decidedly different sounds formulated for radio of the era, which could differ markedly from those vinyl LP's configured for home stereo systems with multiple means to adjust sound quality

Timing is an additional rationale behind the compilation and issue of The Doors The Singles. The previously reissued edition of the band's eponymous debut presaged a similar commemorative package of its aforementioned followup, the release of which thus fashions bookends for this collection of an artist's work that carries multiple levels of significance, not all of which may be readily apparent to novice listeners or self-styled rock scholars.

Track Listing: CD 1: Break On Through (To The Other Side); End Of The Night; Light My Fire; The Crystal Ship; People Are Strange; Unhappy Girl; Love Me Two Times; Moonlight Drive; The Unknown Soldier; We Could Be So Good Together; Hello, I Love You; Love Street; Touch Me; Wild Child; Wishful Sinful; Who Scared You; Tell All The People; Easy Ride; Runnin’ Blu; Do I; You Make Me Real;Roadhouse Blues; Love Her Madly; (You Need Meat) Don’t Go No Further; Riders On The Storm. The Changeling. CD 2: Tightrope Ride; Variety Is The Spice Of Life; Ships W/ Sails; In The Eye Of The Sun; Get Up And Dance; Treetrunk; The Mosquito; It Slipped My Mind; The Piano Bird; Good Rockin; Roadhouse Blues; Albinoni: Adagio; Gloria; Moonlight Drive; Hello, I Love You; Touch Me; Wishful Sinful; Tell All The People. Blu-ray Disc - The Best Of The Doors (1973): Who Do You Love; Soul Kitchen; Hello, I Love You; People Are Strange; Riders On The Storm; Touch Me; Love Her Madly; Love Me Two Times; Take It As It Comes; Moonlight Drive; Light My Fire.