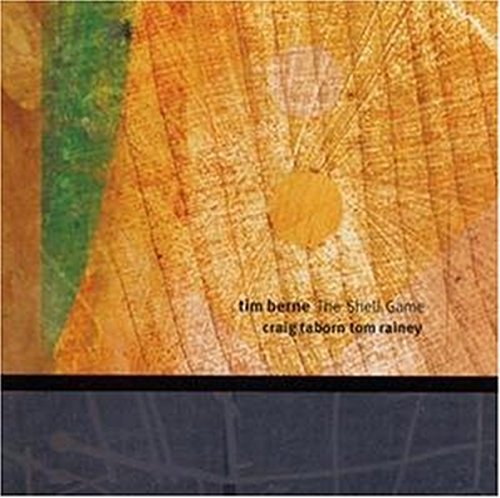 Typically edgy and in your face, Tim Berne refuses to compromise on his Thirsty Ear debut. While other records in Matt Shipp's Blue Series have tended toward the accessible side of free jazz, Berne's The Shell Game only expands upon his unique idiosyncratic vision. Tired of the traditional sax/bass/drums trio setting, the saxophonist steps into a different configuration here. He joins forces with old-time collaborator Tom Rainey on drums and fresh mischief-maker Craig Taborn on keys and electronics. Taborn's contributions on The Shell Game are crucial: by engaging various loops, samples, and processing, he vastly expands the texture of the trio. (And at times he provides much-needed support in the bass range, which booms out of the mix at daring levels.)

One might imagine electronics to be the anti-Berne, since his compositions and style of improvisation rely so much on groundedness and instant reaction. But Taborn handles the role quite well, allowing the other players to expand even when he's lying back. Perhaps the reason he "fits" so well with Berne's vision is that Berne has historically done his best work with larger groups. By providing a more textured and expansive backdrop, he provides the illusion of several players at once.

Berne's alto playing on The Shell Game is par for the course: hard-edged, relentless, and snaky in its path. His compositions employ a touchstone melody and set the tone for the interplay that follows, but as usual they remain otherwise quite open-ended. Much of his playing has an obsessive-compulsive feel—Berne keeps digging away at themes, exploring the dynamics of certain note combinations within shifting contexts. (And he's particularly interested in "dissonant" intervals and major/minor ambiguity.) When he finally exhausts the conventional melodic approach, he takes his instrument into multiphonic overblown overdrive.

But moments of unexpected change appear regularly, and Taborn and Rainey both exude a matching restless energy. After Berne's full-blown saxophone assault on the second tune, Taborn plies a healthy dose of keyboard layering to achieve an almost ambient feel. Gradually, with the emergence of an angular melody, he leads the group back to the main theme. Tom Rainey's drumming is outstanding: truly his best work to date. At times he evokes the impatient restlessness of Jim Black; at others he hugs the groove or runs free. Rainey defies the usual drummer's fixation on polyrhythm, instead going after color and propulsive accents within an overall defined structure.

All things considered, The Shell Game ranks with Berne's best work. It presents a wide variety of textures and moods. At times the trio pursues deceptively straightforward progressions; at others it takes them apart to the very last nuance—and when you least expect it, they break free into exciting groove-driven jams. The only fault one might find with this record is that Berne's playing can sometimes be painfully relentless, because he seems to have a very high threshhold for tension. But that's a minor criticism relative to what otherwise is a suprisingly inventive and creatively resonant recording.