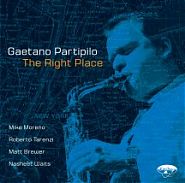 Finding himself at The Right Place, the 33-year-old altoist Gaetano Partipilo shows he's an Italian up-and-comer as exciting as pianist Stefano Bollini or trombonist Gianluca Petrella, with whom he first co-emerged on their recording Up, Up with the Jazz Convention (Schema, 1997).

Partipilo is a complete-game player whose tone and phraseology is an exciting amalgam of alto history, at times recalling the breathiness and liquidity of the Sonny's—both Criss and Fortune—while also capable of the staccato angularity of Steve Coleman and Greg Osby, who is readily cited by Partipilo as an influence.

His equally talented countryman, pianist Roberto Tarenzi—who illuminated Dream of Nite (Verve, 2007) with Dave Liebman—completes the European contingent of this Euro-American collaboration. While the formidable rhythm section of Nasheet Waits on drums and Mike Brewer on bass ensures rhythmic power and invention, it's the presence of guitarist Mike Moreno that places a shimmering vibe on this entire session.

Knotty propulsion is a prevailing compositional precept, as shown by "New York Meeting," beginning with a vigorous push ahead by Brewer and Waits, jacking a 13/4 meter; but the jagged corners of any M-Base derivatives are all rubbed smooth by the ensemble, especially by Tarenzi's cushioning Rhodes. Solos grow seamlessly, and inabruptly, from melodies, as Moreno takes signature flight with his particular brand of tonal airiness and rhapsodic rhythmic intent, gusting the listener from awareness into curiosity. Fortunate is the soloist who takes Moreno's handoffs, and Partipilo proves up to the task by using a soft tone and flitting phraseology before taunting the barlines with rhythmic alterations, tucking phrases into furrows where they have no business foraying.

This group can go more careening, as on "Listening at—3," wherein Partipilo and Moreno ramp up the aggression quotient. The saxophonist shows his comfort level in more free modalities, underpinned by Tarenzi's mysticism, which then gives way to straight-ahead swing and ripping linearity. Somehow Brewer and Waits throttle to a funk pocket before retrograding to clattering context, where Moreno unpacks atmospheric reticulations, remaining harmonically consonant despite fitting the "freer" soundscape.

The most thrilling tunes convey the most motion, whether broken, like "Syntax Error," or skyward, as on "110.1 FM." Most people don't run in three, but if they did, this "station," fomented by Waits' prodigious turn, would instigate faster speeds. Runners would then be levitated by Moreno, who's everywhere, co-stating the head and accentuating Partipilo's every move, this time without piano under the altoist's most biting solo of the session.

Moreno has emerged from the current vanguard of a handful of modernists as the first guitarist to have earned the descriptor "post-Rosenwinkelian." Kindred attributes are revealed as his stratospheric sonics arc over booming bass and cantankerous kit, melding gossamer tone to harmonic sophistication and flat-out speed.

The conceptual thrust of Partipilo, combined with the invaluable contributions of Moreno in an incredible sideman appearance, categorizes this as a must-hear session.