Kristo Rodzevski: The Rabbit and the Fallen Sycamore 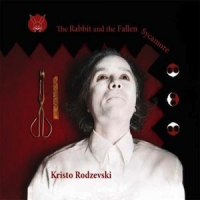 A glancing blow from Kristo Rodzevski's trilogy-concluding The Rabbit and the Fallen Sycamore will bring to mind a Matthew Sweet on mushrooms crossed with Morrissey in a good, if silly, mood. Preceded by Batania (Self Produced, 2015) and Bitter Almonds (Self Produced, 2017), The Rabbit completes Rodzevski's evolution into a musician capable of drawing consonance out of dissonance and aural order out of seeming chaos.

Because this is what Rodzevski specializes in: pop songs composed retrograde, populated with ill-behaved chords strummed garage-style behind abstract lyrics...and that is just the opener, "Polyester Suit." "Out of Key" redefines punk-blues with a Weimar Berlin edge with hints of R.E.M. and Nirvana. Rodzevski accomplishes this sound by stirring in jazz elements provided by tenor saxophonist Ingrid Laubrock, trombonist Brian Drye, and guitarist Mary Halvorson. "The gray area between nostalgia and expectation" pretty well describes the environment of the songs contained on The Rabbit, coming full circle as Rodzevski completes his impressive trilogy.

Polyester Suit; Bucharest, 1913; Your Name; Madadayo; Octopus; Meet Me Online; Out of Key; Wire; Varanasi; The Rabbit and the Fallen Sycamore.

Title: The Rabbit and the Fallen Sycamore | Year Released: 2018 | Record Label: Self Produced