The Pierre Hurel Trio at the Regattabar, Cambridge, MA 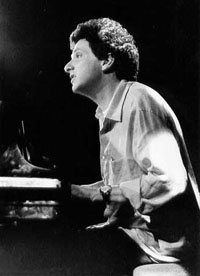 For his first Regattabar show in a year, pianist and composer Pierre Hurel introduced his new trio and premiered a number of new compositions. Twenty-five years ago, Hurel arrived from France to study jazz at Berklee College, and he stayed on to teach at Berklee and build a career. Outside Boston, his performance venues include the Knickerbocker in New York and festivals in Europe. His most recent release, The Pierre Hurel Trio Live (Liger, 2007), features his former trio with bassist John Funkhouser and drummer Mike Connors.
The trio's new bassist is Bruno Råberg, who came from Sweden and now performs and records in the U.S. and abroad, including with his own group. Råberg teaches at Berklee College, and he cites as an influence his intensive study of Indian music. The trio's new drummer is Brooke Sofferman, a New Englander who performs and records with his own group and with a number of others in the Northeast. He teaches at New England Conservatory.

The trio opened with the standard "Just You, Just Me." Following a solo exploratory introduction, Hurel treated the melody with rhythmic improvisation that fragmented and transformed its phrases. For the most part, he played a harmonized rather than a single-note line, though often sounding Monk-ish. Many of the evening's other selections similarly featured a long introduction, rhythm-based improvisation, and right-hand harmonizing.
Hurel described his first original of the show as a non-traditional blues, an original genre he's used in other compositions. He played blue notes and blues figures, but rather than the 12-bar blues, he used his own form with chord changes that tended to move by major thirds. Sofferman and Råberg took their solos as a duet, an interesting arrangement that produced a temporary shift in the normal trio balance.

Hurel has cited the influence on his work of classical music, especially romantic, impressionistic, and early modern styles. During this performance, the classical traces, for the most part, were subtly incorporated, occasionally acquiring prominence, as in the most somber piece, "You Are Gone." With progressions moving mainly by thirds, the balladic melody's descending intervals were reminiscent of Chopin.

For the standard "Lover Man," Hurel followed an introduction of arpeggios and roaming chords, suggestive of high romanticism, with an intense rhythmic reinterpretation of the song's phrases. Sofferman and Råberg closely followed the pianist with subtle shifts in time that demonstrated the trio's tightly woven coherence. A long introduction to "Autumn Leaves" featured the drummer and bassist, Sofferman producing an eerie sound by rubbing his cymbal and Råberg using his bow's handle to create a thin tremolo.

Several Hurel originals were in a modal style with a driving, march-like groove. "Communion of Five" started with drums and bass establishing the 5/4 meter, while the droning fifths in Hurel's left hand suggested another source for the tune's title. The pianist's melismatic improvisation gave way to Råberg's bowed solo, which he colored with bowed tremulo and harmonics.

The compelling "Welcome" built a march-like momentum over broken octaves on a single chord that eventually changed. The folkish melody varied slightly in each segment but invariably ended with a cadential figure of II-III-I. Toward the end, Sofferman played a solo with his hands while Hurel supplied a repeated chord pattern.

Announcing "Paris-Somerville," Hurel observed wryly that one doesn't always make with full knowledge the decisions that shape one's life. Reflecting the amusing juxtaposition in the title, the 3/4-time piece veered from pretty and Satie-ish to choppy with oddly accented dissonances.

"Conception" had an even more personal story: having just married during the past year, Hurel and his wife were expecting a child. The 3/4-time free-form piece suggested a mysterious gestational journey, with shifts between major and minor and occasional sudden changes in tonality and volume. A few bars of a child-like tune made an abrupt but fitting end.

"New Era" reflected another kind of beginning, a new political administration. Without preliminaries, the trio launched the rousing, march-like tune, based on descending intervals. In the second half of the tune, each phrase ended with the unusual chordal progression of bVI-bVII-I (also used in "Welcome"). Sofferman punctuated the piece with a snappy solo on toms and snare drum.

The evening's sizable, appreciative audience attested to the local following that Hurel has built over the years. With his new trio, he seems well-positioned to gain the increased exposure that his playing and composition merit.