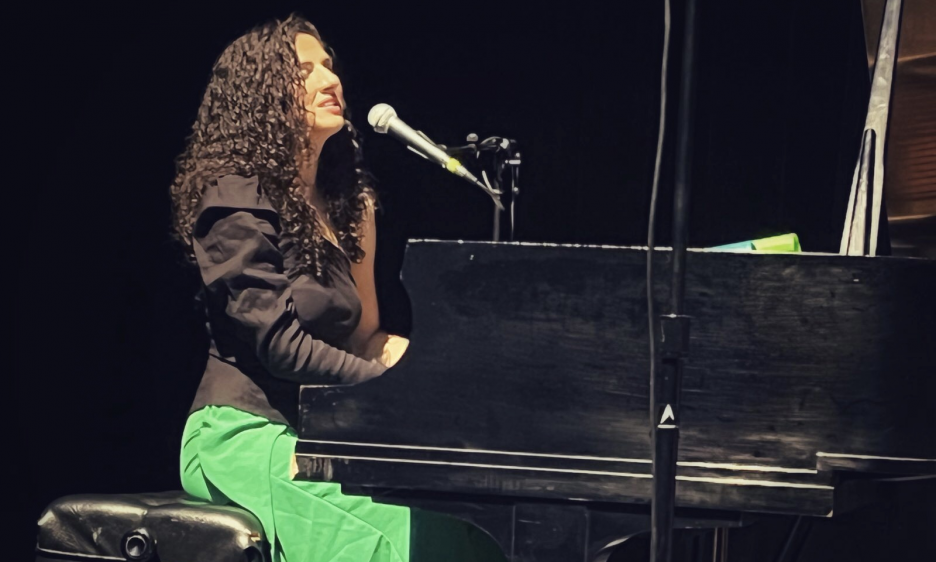 By Sean Conroy
June 21, 2022
Sign in to view read count
Releasing art into the wild is an act that is fraught with doubt and second guessing. These feelings are not unique to jazz artists, or even artists of this generation of immediate sharing and viral sensations. Writing of her friends' decision to surprise her by publishing her verse, 17th century American poet Anne Bradstreet was apologetic: a mother helplessly subjecting her child to public scrutiny. As a shield, a mother's love was not enough:

"I cast thee by as one unfit for light / Thy Visage was so irksome in my sight / Yet being mine own, at length affection would / Thy blemishes amend, if so I could"

If Laila Biali entertained any of these doubts about her artistic offspring, it does not show. She decided, in the midst of social distancing, Zoom meetings and the pandemic lockdowns of 2020, to release her album Out of Dust, in defiance of conventional wisdom and the advice of those closest to her. "I said no," Biali explains. "We need this."

On June 11th, Biali made the final stop on her tour of the U.S. at the Paramount Arts Center in Ashland, Kentucky before returning to her native Canada. Pandemic-related difficulties kept Biali from a prior engagement at the PAC. As the first performer in this year's Jazz Alley Series, Biali celebrated the Great American and Canadian Songbooks, as well as a few of her own compositions, backed by a band that included bassist Jimmy Sullivan and drummer Jordan Perlson.

Her halting rendition of countryman Neil Young's "Heart of Gold," where she traded verses with bassist Jimmy Sullivan, was a tasteful exploration of musical space— of building anticipation. If Young's original rambles and tramps its way to salvation, Biali, by contrast, carefully picks her way through bittersweet reflection, by turns seeker and grateful traveler.

In the prelude to what may be her signature song, "Satellite," Biali described her inspiration: "I always wanted a 'magic jazz baby,'" one of those quietly content children, peacefully nodding off in the most raucous jazz club. "But my son, Josh, is a singer," Biali laughed. While on the road, she imagined her son, in her car, singing along with her to the radio. The effect was not absence, but presence: her voice soared, echoing a kinship that "cuts across the galaxy."

I overheard a concert goer at Saturday night's performance say to his guest at the table that the Jazz Alley series "usually has at least a couple of torch singers." No offense to torch singers, but Biali has more depth and verve than to be typecast as your typical lovelorn lounge act. And in fairness, only one selection, "But Beautiful," played by request for Jazz Alley organizer Roger Hall and dedicated to his wife Trish, could be even loosely characterized as a "torch song." With all the pathos and tenderness of the best covers of this jazz standard, Biali made the most of this space, but the unrequited and melancholy is not her permanent address. In her musical universe, signals are received and returned. Nothing is lost to the ether.

Speaking of requests: Biali describes the "Request-o-matic," her habit of soliciting song requests from the audience then keeping, for later performance a few choice selections, all a departure from the expected. The mind fumbles for songs that would challenge Biali's dynamic vocal range and adept arrangements. She is at home with the blues-drenched, hand-clapping, call-and-response of songs like "Gotta Love" and "Revival," the playful "Sugar" (promised "sugar rush" of quickening tempo included), or the full-body cabaret of "Mushaboom," where, Bobby McFerrin-style, Biali plays a pair of boomwhackers (color-coded percussion tubes, used as a teaching tool for young musicians) in time with the music against herself. Her cover of David Bowie's "Let's Dance" was an ardent, plaintive invitation, less footloose and fancy-free and more suggestive of desperate romantic entanglement.

In our return to live music, there is a persistent theme: of just how good each other's company feels. If any artist can be said to perfectly chronicle these strange times of alienation and yearning—of connectedness and unbridgeable distance— from which we have unsurely emerged, it is Laila Biali. Or, to borrow her satellite metaphor, we may all shine, but our glow is often the reflected, borrowed warmth of brighter stars in our cosmos.