By CLIFFORD ALLEN
November 25, 2003
Sign in to view read count 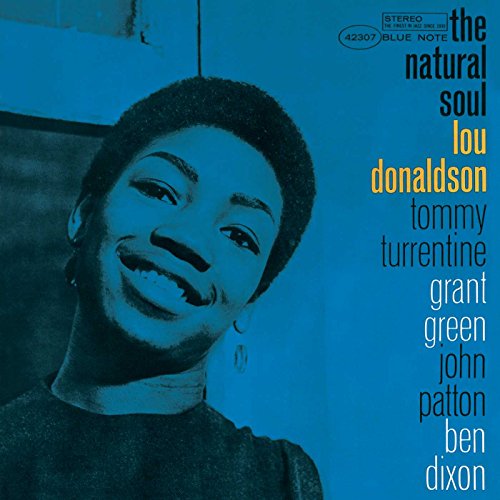 Throughout the ‘60s, Blue Note pretty much held a monopoly on both of hard bop's children: modal jazz (of the Jackie McLean variety) and soul jazz (John Patton, Lou Donaldson and company). Of course, the soul jazz community does not limit itself to the simple pleasures of R&B party records, the reason why clean vinyl copies of Harold Vick and Fred Jackson records aren't a dime a dozen. There is a difference between, say, the approaches of Patton and Don Wilkerson on one hand, and Jimmy Smith and Lou Donaldson on the other. The former offer a straighter, greasier format and the latter a funkiness still firmly rooted in Bud Powell and Charlie Parker. At Rudy Van Gelder's studio in 1962, the two strains of soul jazz met and The Natural Soul is the result.

On this session, the second date Lou Donaldson made with an organ combo, he is joined by the cream of the crop: Patton, guitarist Grant Green, drummer Ben Dixon, and hard bop trumpeter Tommy Turrentine (yes, that Turrentine). Green, Patton, and Dixon were, like the Jimmy Smith Trio, one of the most prevalent organ trios of the period, offering a simpler, grittier R&B over Smith's far-flung virtuosity.

This is not a pejorative account of the group's ability; Green is the Mal Waldron of guitar, emphatically repeating phrases with an almost minimalist intensity, and Patton's soloing is certainly not fettered by his idiom. Donaldson comes out of the post-Bird bag, with a strong affinity for the biting tone of a young Jackie McLean and a humorous lyricism that has echoes of Sonny Rollins.

Turrentine might be the least familiar player here, a brassy post-Brownie player who worked regularly with his brother in the early '60s, as well as with pianist Horace Parlan and, oddly, Archie Shepp. In addition to three standards, the group hits a comfortingly steaming version of Patton's hit "Funky Mama," two Donaldson originals, and the obscure Latin jazz pianist Johnny Acea's "Nice and Greasy." Though the band's funkier tunes are, obviously, what most people come for, one is left with a clearer grasp of the jazz chops of all involved: a brief but weird and engaging statement by Patton on "Love Walked In," for example. The more time the group has to stretch out, the more interesting the solos become - "Funky Mama" and "Sow Belly Blues" each clock in at around ten minutes and, not coincidentally, Patton and Green rip, especially on the latter.

If you're looking for two sides of yeh-yeh, The Natural Soul isn't quite it. But if you're looking for a rollicking jazz record with serious blowing that can double as music for the next cocktail-party bacchanal, then it certainly fits the bill. For prospective listeners less familiar with organ combos and more so with bop, this set offers a happy medium between the two - equal parts Ray Charles and Charlie Chan.