The Marshall Tucker Band
Beyond the Horizon
Shout!Factory
2004

The Marshall Tucker Band had a wider palette of musical influences than any other Southern rockers. The eternally high-spirited Wet Willie (of "Keep On Smilin'" fame) mixed r&b, gospel and pop into their rock and roll stew. Even the granddaddies of the genre, The Allman Brothers Band, forged their style from the three distinct, albeit open-ended, sources: English hard rock ala The Jeff Beck Group, blues from Muddy Waters et, al, and the pure openness of free-jazz ordained by John Coltrane.

MTB, however, had a sure grip on rock, blues, gospel, bluegrass and mainstream jazz(including swing and big band). As demonstrated on their very first album the group was able to write credible material in each of those genres (or mix it up convincingly)as well as play as if each was their forte. The versatility becomes even more evident on their comparatively understated follow-up A New Life and there the band's studio artistry takes full flower with the exhilarating likes of "Another Cruel Love." The remastering of the Marshall Tucker catalog, the release of a hot time left in the vaults as well as a new studio effort form the current lineup provides additional insight into the workings of the group.

Persevering through multiple tragedies like their Dixie rock brethren ABB and Skynyrd(titular leader Toy Caldwell died of heart problems a few years after MTB's disbandment in the earliy 80's), The Marshall Tucker Band exists today, fronted by sole original member, vocalist Doug Gray. This ensemble has actually recorded and released a brand-new album of studio work titled Beyond the Horizon (Shout! Factory/Ramblin' Records, like all the discs reviewed herein), It's an admirable piece of work on its own terms, but a far cry from the fluid inspiration of the original band. Of course like any band of musical brothers, the lineup needs time to coalesce but for now, even on the more successful cuts like the title song, the tracks seem pieced together, like the personnel itself, as if to consciously emulate the MTB 'sound.' right down to the instrumental array. Gray himself should be proud of his loyalty to the band and its following, yet even he seems to be overreaching as a singer on many selections, trying to be more convincing than he really needs to.

His intentions are admirable though, and totally understandable when you listen to the original MTB albums. To capitalize on the jamband scene, each is stickered with the phrase "a band that jams" and for once the marketing ploy is accurate since Marshall Tucker brought intensity to the stage that rivaled the Allmans in depth if not expanse. Hear the way the band digs into the groove of "Take the Highway" from the first album and you know you're hearing musicians without fear. "Can't You See" is modern blues par excellence. The title song of the second album has a feather-light touch, but the band still cooks: the lead guitar of Toy Caldwell, who wrote the bulk of the band's originals, plays with a ringing, stinging ferocity (even his pedal steel-playing has a knife-sharp edge corresponding to the tart flavor of the country material he wrote), offset by the nimble drumming of Paul Riddle and prodded endlessly by the staunch bass guitar movement of his brother Tommy Caldwell(tragically killed in an auto accident in 1980, a few years before heart disease took his brother early). Leavened by the sax and flute of Jerry Eubanks---adding texture in places you wouldn't expect to hear it--- with sparks thrown by the flinty rhythm guitar from George McCorkle(who came to write the band's first 'hit' "Fire on the Mountain"), this chemistry was unmistakable to the audiences they played for, which makes it such a mystery MTB never released a live album in their lifetime. 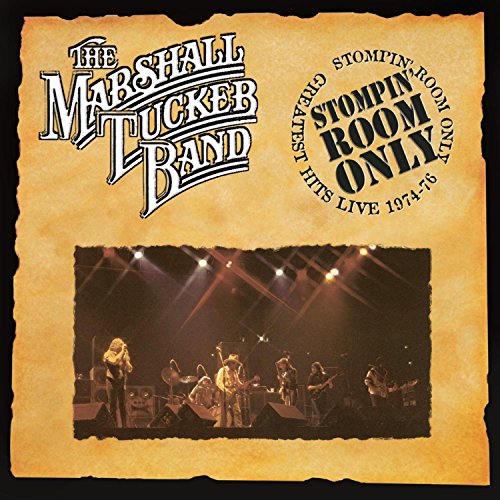 The Marshall Tucker Band
Beyond the Horizon
Shout!Factory
2003

Not that it wasn't prepared. Stompin' Room Only, astutely produced as was most of the group's studio work by Paul Hornsby(who also remastered this disc), was ready for release when Capricorn Records dissolved in the late Seventies and it took the reformation of the band by Gray to inaugurate its release. It should be as much a cause for celebration as the remasters themselves: largely recorded in England, with one cut from a Volunteer Jam( a Charlie Daniels-organized festival held during the heyday of Southern Rock)and completed with selections from the same Milwaukee Wisconsin venue where MTB caught the live portion of Where We All Belong, the band often moves at a gallop as on the instrumental introduction "Long Hard Ride," but during "24 Hours at a Time," a stage showpiece often featuring, as here, Charlie Daniels on fiddle, MTB demonstrates an equally sure grasp of restraint. The six musicians etch a detail comparable to that of their studio work in these stage recordings, and perform some healthy extensions of songs such "Searchin' for a Rainbow" that appeared in much more compact form on the studio takes. While it's clearly the rhythm section and Toy Caldwell who strengthen that song and "Fire on the Mountain", the synchronous interaction of the rest of The Marshall Tucker Band is noteworthy as well; they were as tight as can be, a virtue made increasingly manifest as Stompin' progresses into earlier material such as "Take the Highway." where they literally churn up a storm.

Hearing this MTB concert disc puts their studio albums in a much different perspective. Ironically the band began to reel itself in at the very time they were flourishing as a live act and promoting themselves as such on Where We All Belong, originally release on vinyl lp as a two-record set, one of studio work, the other of concert selections. Yet the jazzy underpinning of songs drenched in cowboy lore gave the music some distinction from the c&w outlaw style just beginning to reach the masses in the mid to late Seventies. Marshall Tucker imbue the studio songs here, and on the more-stylized follow-up, Long Hard Ride , with the same infectious, boyish ebullience and charming naiveté with which they debuted. Your taste and loyalty to the band will determine whether the more expansive approach of the two earliest albums and the final work with the original lineup— Together Forever , overseen in the studio by Crusaders' producer Stewart Levine—is more or less palatable than this middle period work, but there's no denying the terrific remastering by Mike Thomas on all the catalog cd's.

It does him no disservice when in checking the credits, you notice how Marshall Tucker made sure much of the original mastering of their albums was assigned to the expert ears of George Marino: well-recorded and produced master tapes lend themselves to what you hear on the eponymous debut, A New Life and the rest: a mix full of presence, clarity and punch. You can even listen to the most accessible commercial likes of Carolina Dreams , containing MTB's bonafide hit "Heard It in a Love Song," and enjoy the music for its magnificent sound alone(it belies the somewhat trite titles like "Tell It to the Devil" and "Fly Like an Eagle"). Even so, you may argue that the band shortchanges itself by the confinement of structure on Searchin' For a Rainbow : the pressure of the label for more commercial recordings underlies the change in direction and Marshall Tucker acquits itself well under the circumstances, with Toy composing material such as "Bound and Determined," (included as a rippling live bonus on this cd) as astutely as ever—and even cleverly commenting on his artistic dilemma in the course of doing so!

It's fitting Doug Gray has become the standard bearer for the Marshall Tucker Band in its modern incarnation. His deep throaty tenor always lent a deeply authentic soulful feel and gospel-like wail to the most straightforward country songs and, when the band soared, his voice maintained the altitude. At this best on Beyond the Horizon , he performs the same feat. The compositional contributions of Chris Hicks, especially "Into Your Eyes" and "Angel( With a Honky-Tonk Heart)", hold more than a little potential, but juxtaposing his songs with just two of the late Toy Caldwell's illuminates the improvement necessary: "Texas on my Mind" radiates a deep Southern sensibility—as "King of the Delta blues" does not—while "Midnight Promises" exudes a straightforward emotionalism that Hicks could emulate in tunes he writes such "Never Find Another You." The band's performance as a unit, in addition to the eminently professional production job (by Gray and Hicks), suggest the raw material is all there; it's a matter of honing the natural talent and practice, as was the case with the original lineup.

That sextet had performed together for over five years, with audiences providing increasing validation for their work, by the time Stompin', and (most of the live bonus cuts adorning the remasters) were captured on tape. In addition, as documented in the cd's liner notes(uniformly informative throughout the series where all the original artwork and graphics are restored), Marshall Tucker did some serious rehearsals in preparation for the remote recording. Yet as the album attests by its consistently rousing performances, they didn't squeeze out all the spontaneity. Rather, MTB portray themselves as a highly-professional unit of inspired young musicians fulfilling the promise of their early work. This should, in turn give hope to the current lineup who may yet achieve that same level of excellence, provided they give a similar devotion and loyalty to the name. Instantly as essential as the first two albums, Stompin Room Only , proves Marshall Tucker transcends labels like 'Dixie rock' or 'jamband' because, like all truly great bands, they defy categorization.

Visit the Marshall Tucker Band on the web at www.marshalltuckerband.com .

About The Marshall Tucker Band