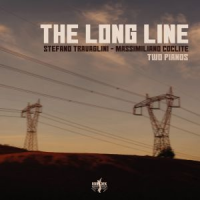 Italian pianists Stefano Travaglini and Massimiliano Coclite team up for a varied session of original improvisations and those influenced by composers of historical consequence. Both artists are coming from inspiring releases, Travaglini with his solo album Ellipse (Notami Jazz, 2017) and Coclite with his namesake quartet on Strange People (Odardek Records, 2018). These two musicians have demonstrated a gift for injecting expressive personality and control into real-time improvisations, which they refer to as "instant compositions."

Travaglini studied with Arvo Part and jazz and classical composer Vince Mendoza. A multi-instrumentalist who has also performed on oboe and bass, Travaglini has toured four continents playing an array of music including jazz, classical and gypsy folksongs. A graduate of the Conservatoires of Teramo and Bari, Coclite is a long-time member of the wind quintet D'Annunzio, and has played with symphony orchestras in several European cities. He has recorded four albums as a leader or co-leader, and is a jazz instructor at two Italian conservatories.

The album title—and corresponding track—are not inspired by the music but by a quote from composer Aaron Copland, who wrote referring to the continuity of composing. There is a feeling of interconnection and structure in these pieces though most are improvised in real time. Lyricism and classical foundations mesh with jazz improvisations and subtle eccentricities, creating a genre-less program which keeps one slightly off-guard. Those personality traits work to make yet another of the countless covers of "Body and Soul" feel somewhat refreshed. The inspiration for "Garden of Delights" is the 1920s German composer Paul Hindemith, while "Querendo Dançar" reaches back to the seventeenth-century keyboardist/composer John Bull.

The Long Line shows the resourcefulness of two inventive artists, who, rather than being confined by genre, constantly reshape their music. Shadings only paraphrase styles, never becoming married to them. Throughout the eleven tracks (twelve, with two versions of "Melos") the two pianists suggest their combined influences, and then push them outward, loosely codified, sophisticated, and still free enough to be fun.