By JIM SANTELLA
December 6, 2006
Sign in to view read count 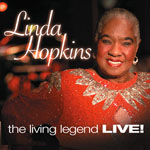 Recorded earlier this year at Catalina Bar and Grill in Hollywood, The Living Legend Live! features Linda Hopkins in a program of old-school blues. She shakes the very foundation of LA's premier jazz club with her deep-felt delivery, telling the stories and expressing each theme with convincing authority. Featuring Michael Konik and His Tasty Band, the session rocks hard with a tradition that has been going strong for over a century.

Hopkins, 81, has been there, done that. Born in New Orleans, she was raised on gospel and introduced to the blues first-hand. Her introduction to Bessie Smith wasn't through vinyl, though; it was in person. Later came a stint with Johnny Otis, and plenty of opportunities worldwide. Concerts, clubs, festivals and the theater have introduced her to a broad audience. Throughout her lengthy career, Hopkins has never abandoned her true calling: singing the blues from the heart.

A live appearance often brings out creative feelings in a performer. Hopkins is up close and personal in her one-hour program, interacting with alto saxophonist Kim Richmond and the conservative piano trio intuitively. This acoustic blues session fits her like a glove. While the singer's voice has aged considerably, there's no denying her spirit. Along with her four accompanists, she's on fire. She tells you where to meet her, what to wear, who to bring and what's gonna happen. It doesn't get much better than this.

Vocalist Michael Konik joins her for "Every Day, lending an expressive closing to the program. Together, they share their enthusiasm with the room, which makes this live session explode, bringing out the best in everyone.

Let the Good Times Roll; Down Home Blues; Drown in My Own Tears; Steppin