The Led Zeppelin Papers: Houses of the Holy, Deluxe Edition 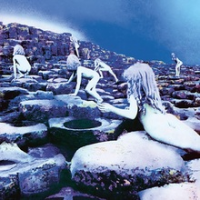 "For me, Led Zeppelin began as the epitome of everything good about rock: solid guitar work, forceful vocals and rhythmic backing, devotion to primal blues forms, and most of all, thunderous excitement on stage and vinyl. But as superstardom came to them, so too came the gradual evaporation of those qualities from their sound....

Even after a hundred listenings I'm still not convinced this album is by the same group that brought us the likes of "Communication Breakdown," "Heartbreaker" and "Black Dog." The powerfully simplistic rhythms and surging adrenaline drive that made those songs so compelling is nowhere to be found... Led Zeppelin IV's "Rock 'n' Roll" to the contrary, Led Zeppelin's forte has always been rockin' the blues; if they took themselves seriously they'd realize that they are foolish to step outside that genre...

Two songs are naked imitations, and they're easily the worst things this band has ever attempted. "The Crunge" reproduces James Brown so faithfully that it's every bit as boring, repetitive and cliched as "Good Foot." Yakety-yak guitar, boom-boom bass, astoundingly idiotic lyrics ("when she walks, she walks, and when she talks, she talks")—it's all there...

"D'yer Mak'er" is even worse, a pathetic stab at reggae that would probably get the Zep laughed off the island if they bothered playing it in Jamaica. Like every other band following rock's latest fad, Led Zeppelin shows little understanding of what reggae is about—"D'yer Mak'er" is obnoxiously heavy-handed and totally devoid of the native form's sensibilities...

When you really get down to it Led Zeppelin hasn't come up with a consistent crop of heavymetal spuds since their second album. Their last three efforts have been so uneven that had they started with Led Zeppelin III I'm convinced they wouldn't be here today...In simple fact of matter, Houses of the Holy was 17 months in preparation, yet Led Zeppelin I (the product of a mere 15 hours) cuts it to shreds.

So all in all it's been two separate groups we've called Led Zeppelin, and I've tired of waiting for the only legitimate one to return. An occasional zinger like "When the Levee Breaks" isn't enough, especially when there are so many other groups today that don't bullshit around with inferior tripe like "Stairway to Heaven." Beck, Bogart & Appice, Black Sabbath, the Groundhogs, Robin Trower—the list is long and they all fare musically better than the Zep because they stick to what they do best. Page and friends should similarly realize their limitations and get back to playing the blues-rock that moves mountains. Until they do Led Zeppelin will remain Limp Blimp..."

I have never agreed with such a pornographically flawed review more.

There are two completely separate and distinct Led Zeppelins and they became fully formed in their individual uniqueness with the release of Houses of the Holy. The fading notes of Memphis Minnie's "When the Levee Breaks" at the end of Led Zeppelin IV signals one side of an historical hinge in the life of the band, one that pivots at a 90-degree angle between these two disparate bands embodied in a single entity. Hell, if I could stretch this metaphor into a Holy Trinity, I would. The other side of the historic hinge is, of course Houses of the Holy (HOTH).

With HOTH, Led Zeppelin reached its evolutionary zenith: Led Zeppelin became Led Zeppelin. LZ was no longer an exploratory blues band, stretching the boundaries of those tired twelve bars, transmogrifying them into something molten and corrosive that ultimately gave birth to a million idiot, bastard children in the 1980s and beyond. They solidified their identity for a great portion of their dedicated fans, those crowing poetically about HOTH and beyond rather than those who staunchly preferring Led Zeppelin IV and before. The music on HOTH is more nuanced and cultivated (or maybe, abstract) than on the previous recordings, possessing that thing that make post-IV LZ, LZ to an entire generation barely acknowledging I through IV.

In keeping with the band's now staid tradition of kicking their albums off with some flavor of searing rock and roll, LZ shoots "The Song Remains the Same" from its sonic howitzer, frantic and bleeding only to have it become introspective before having a psychotic break for the remainder of its duration. The acoustic/electric "The Rain Song" further evolves Page's use of the idee fixe in his compositions as an echo of his compositional technique. He will echo this in the LZ-defining "Over the Hills and Far Away" and "No Quarter." These two songs represent the fruition of LZ as they came fully into their own. The latter may be seen as the band's contribution to the continuing evolution of the blues that LZ had been instrumental in since the first album. Again, John Bonham's drumming proves superlative and ground breaking. Compare Plants vocals here with those on "Bring it on Home."

"The Crunge" is a bit of excellent James Brown funk that no contemporary bands could even begin to touch. Page's guitar is definitive as is Bonham's drumming. "The Crunge" was the b-side to the "D'yer M'ker" single, "D'yer M'ker" being LZ's malignantly flawed tempt at reggae/dub. It is truly one of LZ's worst songs polluting "classic rock" playlists all over the bandwidth. It is something for which Page must never be forgiven (well, this and the Firm's "Radioactive"). Save for this single turd in the punchbowl, HOTH is a near perfect recording by any standard. The "new" added material echoes that on II and III, it is nothing special and has been available for years as bootlegs.

Being a member of the group of fans that favors the first four recordings, I have grown to value HOTH as the identity that LZ forged in the end and the introduction to the band's masterpiece Physical Graffiti. It will never be high on my playlist.