By MIKE PERCIACCANTE
July 12, 2014
Sign in to view read count 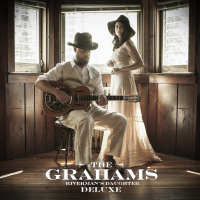 Alyssa and Doug Graham are a husband and wife duo who met in gramar school. The duo's music is passionate, joyful, harmonious and captivating. It isn't exactly country, though, country music fans will love it. It isn't exactly folk, yet folk music aficionados will immediately connect with it. The music isn't exactly pop, yet it features pop elements. It can't be called blues but it is certainly bluesy. It sure is rootsy, but the term rootsy doesn't do justice to the music that this group creates. It's not really bluegrass, because bluegrass is only a portion of what type of music group plays. Jazz? Not really but there are plenty of jazzy elements that can be found in The Grahams' music. The best overall bucket that The Grahams would fit into is called Americana. It's not really a musical genre; it's more of a descriptive term.

Americana...Americana is an amalgamation of country, blues, roots, pop, jazz, bluegrass, folk and even a touch of rock. And, The Grahams are as Americana as it gets. On the deluxe edition of Riverman's Daughter Alyssa and Doug pull out all the stops and tell wondrous stories. The album has it all—happy songs, gut-wrenchingly sad songs, nostalgic songs, power ballads, songs of yearning, desire and longing.

This duo excels in storytelling. Drawing on the cultural and musical journeys of their influences (Neil Young, The Grateful Dead, The Band, Bob Dylan , The Carter Family, The Louvin Brothers, Johnny Cash and The Stanley Brothers) The Grahams have crafted a remarkable document of the American condition. The resulting CD is more of a journal, rather than an album. The lyrics read much like a diary would. They are the narratives, entries and life stories set to music, with Alyssa's hauntingly beautiful vocals overlayed. Though her singing can be mellifluous, her vocals are not always sweet and smooth. She can also be ballsy and raw and sing in a raspy and assertive voice. As a result the vocal stylings on any Grahams song is best described as electrifying and shiver-up-the-spine-inducing.

Riverman's Daughter has many highlights. "Revival Time" (which sounds like it should be played at a good old-fashioned barn dance, "Goodbye Babe;" the bluegrass ballad "If You're In New York" (yes a the bluegrass ballad about New York), "The Piney River," the power ballad "Lonesome Child," the riveting cover of Neil Young's "Down By the River" (available only on the deluxe edition), "A Good Man," "Marnie Hawkins," "Heaven Forbid" and the CD's title track (on which Alyssa's vocals shine) are but a few. The final result is a natural, honest and impressive debut album.