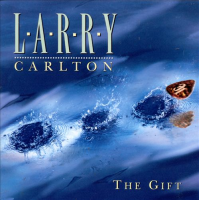 My first exposure to the music of Larry Carlton was on those wonderful Crusaders albums from the early to mid seventies (Crusaders 1, Southern Comfort, Scratch and Chain Reaction). Carlton parted company with Joe Sample, Wayne Henderson, Wilton Felder and Stix Hooper in 1976. He became a much requested session musician and front man to his own band but few could forget his contribution to the police TV series theme tune "Hill Street Blues" in 1982 with Mike Post. I recently picked up a set of headphones at a listening post in Virgin's Jazz Department in Oxford Street, London and was instantly mesmerized by the Al Di Meola type guitar playing of the first cut "Ridin' the treasure," a tune laden with minor breaks and harmonics, perfect for an open air drive along the Pacific Coast Highway.

Joining Carlton on the album is wife Michele who renders an enchanting version of the Beatles "Things we said today" which is the album's only vocal track. The subtle use of improvised chord structures and the vocal and guitar harmonized breaks leads into a familiar Carlton solo which compliments this interpretation.

It is worth mentioning that Carlton went to those impressive studios at Woodland and Quad in Nashville to record much of the album and the use of a steel guitar on the gentle "Pammie Dear" recognizes the influence of country's strong emergence. One could be forgiven for thinking that this was an Earl Klugh track.

Track 5, "Shop till you drop," is right out of the top drawer of his Crusaders sound from 1975 with Larry interplaying with the distinctive keyboards of Rick Jackson whilst "My Old Town" is a bluesy Gary Moore type encounter with solid chord riffs blending with a Hammond type sound. The much underrated saxophonist Kirk Whalum joins Carlton and the team on title track "The Gift" and the smooth "Osaka Cool," the latter being another one of those driving with the wind in your hair cuts which is comparable to the Spyro Gyra and Russ Freeman sound.

The highlight of the album is the mystical "Mourning Dove" which is the perfect remedy to the rush hour and the predictable glut of bills on your doormat. Kirk Whalum harmonizes with Larry on this seven minute tearjerker.

The set wraps up with "Buddy" which is another smoocher reminiscent of that Carlton classic entitled "Sleepwalk" from 1980.

If you like the laid back easy listening styles of Earl Klugh, Russ Freeman, Doc Powell and Lee Ritenour then The Gift will be a valuable addition to your collection. Larry started out in Los Angeles with strong jazz and rock influences. Like many things in life he has mellowed and yet still remains loyal to his roots.

My one slight disappointment was that his wife Michele didn't contribute more to the album but it is still an excellent album worthy of your collection. With Christmas coming, this could be a very special Gift for someone close to you.