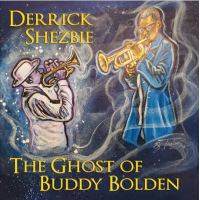 Derrick Shezbie's sophomore release as leader—a mere 26 years after his highly acclaimed debut, Spodie's Back (Warner Bros., 1994)—finds the New Orleans trumpeter in much the same territory as a quarter-century ago: traditional jazz played with an assured combination of virtuosity and energy.

But this should be no surprise. He came of age musically as a member of the neotraditionalist Rebirth Brass Band before Quincy Jones' Qwest Records signed him in the early '90s—and he's continued to play and record with the band in the years since.

Shezbie's The Ghost of Buddy Bolden is specifically designed to recapture the spirit of a late 19th century / early 20th century show by jazz pioneer Buddy Bolden. Publicity notes accompanying the release describe the new album as the product of painstaking research by Shezbie and historian Charles Tolman—and a production schedule mirrored around that of early recordings.

The lineup of the band assembled for the recording reflects the intended setting: trumpet, clarinet, trombone, guitar, bass and drums. (While many early jazz recordings used tuba instead of string bass, that was often a substitution to make up for the fact that early recording technology could not accurately pick up a string bass as effectively as a tuba.)

The arrangements? According to Shezbie's publicity notes, they were loose: The band was hired on short notice from local hangouts (much as Bolden did for his live shows—he was apparently never recorded), and only rehearsed for two days before a single day in the studio.

The result is a brilliant, vibrant slice of traditional jazz that reminds modern listeners why this music made such an immediate and dramatic impact on our culture—why just 20 years after Bolden helped create this music an entire American generation called itself The Jazz Age.

A near-perfect example of how the band captures the spirit of Bolden's time is their take on "Didn't He Ramble." Soaring solos backed by equally spirited multi-part harmonies trade measures with unison three-and four-part choruses. The song opens with a brief introduction by drummer Jerry Anderson, and then Shezbie's trumpet leads a group extrapolation of the theme with clarinetist Louis Ford and trombonist Revert Andrews before the band provides a vocal interlude. Throughout, the rhythm section calls to mind early Basie recordings with its ability to provide a rock-solid foundation while remaining utterly fluid.

Guitarist Carl LeBlanc somehow manages to bridge Bolden's time and our own—comping chords behind the horns in the rhythm section role that guitar held in Bolden's age, but also laying out some brilliant leads and solos in a kind of Django Reinhardt vein. It's a cross between Freddie Green and Charlie Christian—and it works brilliantly.

The songs are all of Bolden's time, and most will be familiar to fans of New Orleans or Dixieland jazz. The set is structured similar to a live show of Bolden's time: The first half is fast, up-tempo numbers, with a progressive slowing down until we get the languid "Funky Butt" led by Ford's warm, fat tone on clarinet, sending the crowd home happy and relaxed.

For a project that began as a fairly academic affair aimed at reproducing a historic process, the result is, in fact, one of the most listenable albums of the year. Rather than the musem piece that the original concept might suggest, jazz fans instead have gotten an utterly in-the-moment snapshot of young musicians celebrating their roots with utter joy.

Intro; Makin Runs; Didn't He Ramble: Ride On King Jesus; Down By the Riverside; Hot Time; Intermission; Pallet On Your Floor; Careless Love; Bucket's Got A Hole In it; Funky Butt