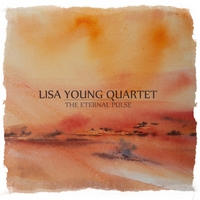 Melbourne jazz singer Lisa Young AU has been a mainstay of the Australian jazz scene for over two decades, whether leading quartets or as a member of Coco's Lunch, the award winning a cappella group she co-founded in the mid-1990s. The Eternal Pulse—her fourth album as leader—marries konnakol with Young's personal take on vocal improvisation in an all-acoustic setting, accompanied by some of Australia's top jazz musicians. Young is undoubtedly in fine voice on these original compositions, her silky vocals earning her a nomination for Best Australian Jazz Vocal Album 2012, in the country's prestigious Bell Awards.

Young's quartet with guitarist Stephen Magnusson has been together since 2005, but drummer Dave Beck and bassist Ben Robertson have been onboard since '99 and '90 respectively. It's not surprising, therefore, that the interplay is so tight and above all playful. "The Internal Pulse" sets the blueprint for much that follows; Young's delightful konnakol path—buoyed by Beck on cajon—heads into denser improvisational territory, with bowed bass and drums mirroring the singer's intensity. Magnusson's airy melodicism on acoustic guitar provides a contrasting shade to the bustle and urgency around him.

Young—a student of south Indian music for many years—has developed a hybrid improvisational style that combines the rhythmic contours of konnakol with a keen melodic sensitivity that owes almost as much to Indian tradition as it does to jazz. This fusion of worlds is beautifully illustrated on "Misra Chappu," which occupies a contemporary space between folk and jazz; Robertson's deeply resonant bass is nicely juxtaposed against the clarity of Young's sustained high notes. The singer impresses too on the upbeat "Tha Thin Tha," trading with Beck and moving between rapid konnakol torrents, over a bass and guitar ostinato, and more lyrical flights. Magnusson takes a short solo notable for its rhythmic and melodic balance.

Ethereal loops and earthy arco create an altogether different ambiance on the intro to "The Turning." Young's entrance is almost respectfully hushed, her vocals of crystalline purity gently accompanied by aslatuas—little Ghanaian shakers. Her improvisation takes wings, pulling the quartet with her. Magnusson stretches out followed by Robertson on a wonderful tune that could have been inspired by dawn breaking in West Africa. Mangnusson and Robertson are central to the gentle lyricism that characterizes "The Glide." Young's vocal is a soothing balm, and her final note lands as softly as a feather.

Greater rhythm colors "The Eternal Pulse," a vehicle for Young's extended improvisation. Young weaves a mazy course, hitching up occasionally with guitar and bass in breezy unison lines. All three jam on a riff towards song's end as Beck stretches out. The gentler pulse at the intro to "The Exchange" gathers strength, with Young and Magnusson urging each other on. Again, there's more than a hint of Africa in the rhythms. "Rupaka" concludes the set with Young and Beck engaging in a miniature konnakol and cajon duet—a fitting coda in its celebration of musical multiculturalism. Melodically appealing and rhythmically engaging, Young has created a fine balance between accessible composition and exciting improvisation. Her sophisticated blend of Indian and jazz idioms seduces from the start and never releases its hold.