The English Beat at the Gramercy Theatre 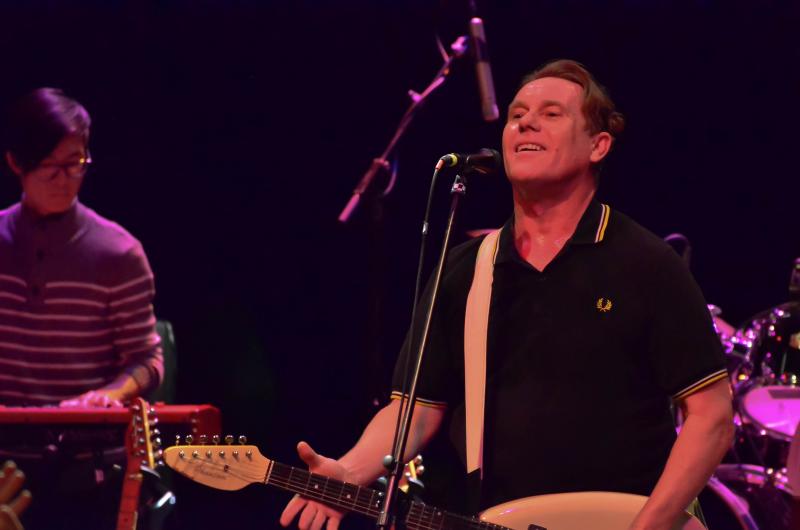 Shortly after the release of Special Beat Service, the band broke up. Wakeling and Ranking Roger then formed General Public. Cox and Steele also went their own way, forming Fine Young Cannibals with vocalist Roland Gift. In the thirty-some-odd years since the release of its last studio album (and following the demise of General Public), the English Beat, currently featuring Wakeling, saxophone virtuoso Matt Morrish, keyboardist extraordinaire Kevin Lum, Larry Young (bass), Jared Palazzolo (guitar), King Schaschas (toaster/vocals) and drummer Nucci Cantrell, has continued to tour and treat fans to ska-revival versions of "Tears of A Clown," "Can't Get Used to Losing You" and "I'll Take You There," as well as the band's original fan faves which include: "Mirror in the Bathroom," "Too Nice to Talk To," "Twist & Crawl," "Hands Off, She's Mine" and "I Confess."

On a pleasant spring evening in late April, Wakeling and his band rolled into New York City and a packed-to-the-gills Gramercy Theatre. The multi-generational crowd featured older fans reliving the early '80s, still dressing the part, wearing clothes that melded mod and punk culture as well as younger fans dressed as rude boys and rude girls. Other audience members were dressed casually in comfortable jeans, t-shirts and sneakers. All were there to party like it was 1982.

When the lights dimmed, the group appeared on stage and Wakeling teased the crowd by asking, "Are you ready? Are you really, really, really ready?" Based on the volume and length of the cheers, it was. Getting right down to it, the band crushed it with a muscular version of "Rough Rider" followed by the Smokey Robinson and the Miracles cover, "Tears of A Clown." The crowd within the intimate concert venue pogo-ed, bopped and swayed to the music as Wakeling led the band through a hits-filled set that also included "Hands Off, She's Mine," an enthusiastic "Twist and Crawl," an infectious version of "I'll Take You There," the jazz meets new wave "I Confess" and a feverish version of "Click Click."

With the crowd in a ska-fueled frenzy, Wakeling and his cohorts put the pedal to the metal and delivered powerful versions of the jangly "Save It For Later," "Whine and Grine/Stand Down Margaret" (which was originally written in an effort to get British Prime Minister Margaret Thatcher to resign or be removed from her office), "Too Nice To Talk To," "Best Friend," Soul Salvation" and the poppy General Public tune "Tenderness."

Throughout the evening, Wakeling and King Schaschas were in fine form. The two men clearly enjoyed interacting with the audience, as their banter between songs was directed at specific fans. They both fed off of the audience and its energy. King Schaschas, who true to his toaster title, acted as master of ceremonies, kept the performance moving forward and engaged with the women in the audience making a number of cute "nudge-and-a-wink" jokes about getting together after the show. Wakeling was having a blast. He smiled and joked and sang his heart out. Wakeling also announced, to a huge roar, that the band's new studio album, Here We Go, Love, its first in 33 years would be released later in 2015.

The evening's festivities ended with tour de force performances of "Ranking Full Stop" and the band's classic "Mirror In The Bathroom." Though this version of the English Beat did not feature Ranking Roger, Steele or Cox, this version of Wakeling's band matched the quality, energy, fast tempos and edginess of the original 2-Tone ska band.

The walls in the venue were sweating, the standing room portion of the floor was crowded with dancers and revelers, while those in the seating section at the rear were bouncing up and down to the beat. Both the band members and the fans grooved, skanked and danced to an evening of energetic, bubbly and lively ska. As with every English Beat performance, a good time was had by all. When last seen, while waiting for his ride to whisk him back to his hotel room, Wakeling was meeting with his fans outside the venue—posing for pictures, signing memorabilia and greeting old friends with hugs and hearty handshakes.