By Thomas Fletcher
August 16, 2021
Sign in to view read count 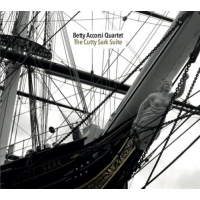 Saxophonist and talented composer Betty Accorsi has released her debut album, The Cutty Sark Suite, inspired by the ship's journey travelling from China to London. The four tracks, averaging seven-and-a-half-minutes, were all recorded at Goldsmiths Music Studios, in affiliation with the university which Accorsi attended, studying for a master's degree in music. Prior to this, the Italian-born musician enrolled at the Conservatoire G. Verdi in Milan where she primarily focused on performing classical repertoire. She then moved to England to pursue her dream of studying jazz saxophone at Trinity Laban, and then subsequently arriving at Goldsmiths, University of London.

This suite is brought together and aims to navigate the listener on the Cutty Sark's return trip to London from China. The ship is now based in Greenwich where Accorsi spent a year studying, hence the inspiration for this album. In her liner notes, she says, "to me, it represented the sense of belonging to the greater, more diverse community that I found in London." Each movement represents a single country that the vessel encountered on her journey including China, Indonesia, South Africa and England. The compositions intend to portray a half real, half imaginary perception of the route.

The voyage begins in Shanghai and is titled "The Golden Wave." It draws inspiration from a Chinese instrument called an Erhu which is replicated at the beginning by Andy Hamill's double bass. The second half of the track turns into a hard-driven blues-esque melting pot of organised madness which eventually leads back to the original melody. The second stop, "In Between," pays homage to Indonesian Gamelan which later develops into a loose jazz ballad, in tribute to Jaco Pastorius. This piece also features an impressive drum solo by Scott MacDonald towards the end. Now halfway, we arrive in South Africa to the music of Zulu warrior dances and the sounds of local saxophonist Basil Coetzee with "At the Edge of the Wave." It draws influences from the country's rich Township jazz tradition. The album concludes with her mooring in England and is celebrated with an arrangement of "All Things Are Quite Silent." This traditional English folk song describes a woman whose man is forced to join the English Navy.

Although the album only lasts for a brief thirty-three minutes, its energy and enthusiasm seems to occur for far longer. With an excellent narrative and concise pathway, The Cutty Sark Suite demonstrates a dynamic display of chemistry between four exceptional musicians.

The Golden Waves; In Between; At the Edge of The Waves; All Things are Quite Silent