By EDWARD ZUCKER
February 14, 2007
Sign in to view read count 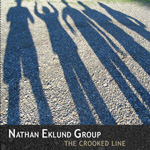 The Crooked Line, Nathan Eklund's sophomore release, reveals a musician on an upward trajectory. Eklund arranged the ten tunes on the CD and composed all of them except Bjork's "Isobel, "All The Things You Are and Lee Morgan's "Totem Pole. The original compositions are the most striking and display a subtle complexity as they traverse the terrain of hard bop and beyond. It is too early in Eklund's career to make comparisons to others, but he is a composer to watch in the future.

On trumpet and flugelhorn, Eklund displays power and control. He can cook, as evidenced by his swirling trumpet solo on the two-part composition "Scatterbrain, or deliver a warm tone on flugelhorn, as displayed on the ballad "More Ways Than One.

Eklund has assembled an impressive band for the outing. Saxophonist Craig Yaremko, playing both tenor and alto, navigates the compositions in a masterly fashion, forging a solid rapport with Eklund. The solos they trade on "Kydee" and the aforementioned "Scatterbrain and "More Ways Than One are some of the high points on the release.

The closing title track, "A Crooked Line, allows the members of the rhythm section room to get down and show their chops. Drummer Josh Dion proves his mettle as he trades off with all band members except bassist Brian Killeen. The outing is an impressive foray in modern mainstream jazz, and the musicianship is dazzling, without turning into a display of excess.

The Mayor; Emancipated Thinking; Isobel; Scatterbrained Prelude; Scatterbrained; More Ways Than One; All the Things You Are; Kydee; Totem Pole; The Crooked Line.