By DOUG COLLETTE
September 26, 2015
Sign in to view read count 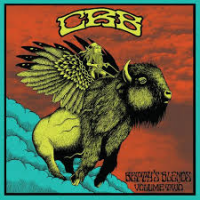 Even before the final fracture of the Black Crowes, the Chris Robinson Brotherhood proved their prolific nature and hearty work ethic. To date they've produced three studio albums, accompanied by regular roadwork, that's now given birth to two live collections in what looks to be a series of such titles under the aegis of Betty Cantor-Jackson, long-time sound guru to the Grateful Dead.

Best From the West consists of seven tracks culled from performances given during the summer of 2014, capturing what the expert engineer calls 'a second set kind of vibe. Which is to say CRB stretch out more than a little here, right from the first track spanning fifteen minutes in the form of "Vibration and Light Suite." A lynch-pin of the latter-day Crowes lineups, Adam MacDougall continues to prove himself indispensable here as well during the course of the other half-dozen tracks including "Beggars Moon" and the vivid imagery of "Tumbleweed in Eden."

His facility with all manner of keyboards allows an equitable share of the workload with guitarist Neal Casal, in arranged portions of the performances as well as these heavily improvised intervals In addition, MacDougall adds a variety of textures to the mix that invariably compels attention to what the five-piece band 's doing at any given time (though he has a slight predilection to cheesy sounds too). Which wouldn't be so resoundingly evident without the studio quality sound Cantor-Jackson imparts to these performances she's recorded, mixed and produced.

As befits their individual and collective experience, the Chris Robinson Brotherhood display both patience and poise when they play within and without structure. The leader's rhythm guitar not only prods Casal for his solos, but enacts tempo shifts the rhythm section of drummer George Sluppick and bassist Mark Dutton navigates faultlessly, all of which interaction(s) comprise a seamless whole. Little wonder the quintet titled one of their tune's "Burn Slow." and while it's the sole instance of any backing vocals, the additional voices add distinctly to the spaced-out atmosphere here.

Yet the continuity includes shifts from the heady likes of the aforementioned opener to funky syncopated likes of "Rosalee" As indicated by the coy jocular refrain here—repeating 'Is the air getting' thinner?are we getting high?' for good effect—CRB has an earthy side as well-developed as their skills at traveling in space: Casal's slide reaffirms that aspect of their persona if MacDougall's prominent clavinet isn't enough in and of itself. Likewise "Shore Power," which progresses from quasi-Chuck Berry changes to volcanic blues, and the ironically titled, languorously played, "Drivin' Wheel."

If all this doesn't sound familiar, even more so when hearing it, Robinson and company pay rightful homage to a major source of their approach, all the way from stylized graphics to musicianship, with a respectful cover of the Grateful Dead's "They Love Each Other;" amended to reflect their personality as much as its authors,' the take illustrates how it's possible for a band to take inspiration and turn it to their own ends without sound unduly reverent, or worse, derivative.

On that front, based on Betty's Blends One and Two, it might be fair to say that, on its own terms, there is nothing like a Chris Robinson Band concert.