By HRAYR ATTARIAN
September 7, 2019
Sign in to view read count 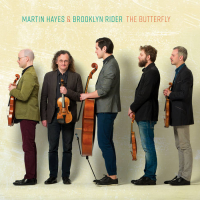 The Butterfly is a colorful collaboration between the Irish fiddler Martin Hayes and the genre-bending New York based quartet, Brooklyn Rider. Interpretations of traditional folk songs make up the bulk of the release that also includes a composition by pianist Peadar Ó Riada and a Hayes original. The uniqueness of release lies in the exchanges between Hayes and the quartet. The former plays the melodies with vibrancy and a refreshingly personal style while the latter creates intricate tonal ambiences around the main motifs that enhance their emotive impact. The result is both charmingly classic as well as elegantly modern.

For instance, the title track opens with quiet dissonance. The musicians perform fragments of the main theme with a baroque flair. The instrumental exchanges— that pizzicato strings punctuate—are free flowing, almost avant-garde in their structure. When the tune finally takes shape, it is in the form of a series of exuberant refrains tinged with melancholy while its backdrop is a dramatic and lively ebb and flow.

Another traditional air, "Port Na bPucai," opens with wailing strings that echo one another almost mimicking the sound of bagpipes. Hayes plays the wistful melody with eloquence and passion, his violin gliding softly and with agility over the quartet's dense sonic tapestry. This expressive and lyrical piece closes on a crepuscular note.

Hayes' "Maghera Mountain" is stately and soaring with a contemplative edge. Hayes coaxes out of his fiddle shimmering, bittersweet phrases while the quartet's drone gently roars like waves of the sea. The contrast makes for a captivating listen with Hayes' lines pregnant with joy despite the expectant atmosphere. A more somber mood prevails in the closing bars with an angular overlap of pensive vamps

Singular in its execution, The Butterfly is unlike any work of world music. The seamless fusion between western classical chamber tradition with its stimulating virtuosity and the mellifluous ebullience of Irish tunes gives the recording its graceful and captivating sound. The innovative spirit of the performers makes it a satisfying and absorbing listening experience.