The Brian Setzer Orchestra Christmas Rocks! Extravaganza with the Record Company at the NYCB Theatre at Westbury 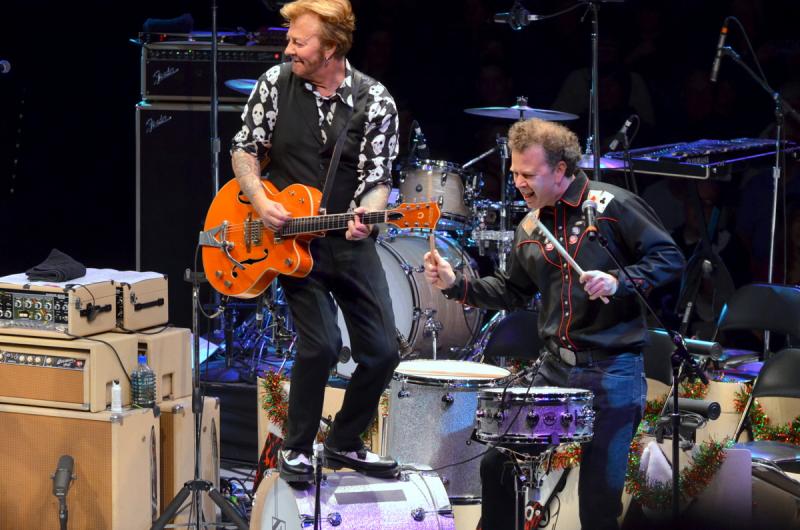 Brian Setzer must really love Christmastime. The rockabilly guitarslinger has been bringing his annual Holiday Spectacular to the NYCB Theatre at Westbury for a number of years. This show as with all of his Christmas Rocks! performances with his orchestra was an extremely high-energy offering that featured not just holiday classics, but Stray Cats materials as well as choice selections from his solo career.

The opening set by the Record Company, a three-piece retro/indie rock/blues/roots rock act from Los Angeles, CA was stellar. Judging by the standing ovation it received following its rockin' performance and the number of crowd members milling about the merchandise stand following the Record Company's set before Brian Setzer's performance and again prior to leaving the venue at the end of the evening, many members of the audience had become newly minted fans. Comprised of guitarist/vocalist Chris Vos, Alex Stiff on guitar and drummer Marc Cazorla, this is a band that should soon be headlining its own tours. Highlights included the purposely lo-fi "On The Move" from Superdead (TRC Records, 2012) and "Feels So Good" from the album of the same name (TRC Records, 2013) as well as "4 Days, 3 Nights." Prior to "Don't Let Ne Get Lonely" (with its call and response "woah, woah, woah banter with the audience), Vos publicly thanked Setzer when he said, "We owe Brian Setzer a lot of gratitude for the rest of our lives, This is the first time we've even been taken out on tour. What a great guy." Before closing with a tremendous cover of Freddy Cannon's "Tallahassee Lassie," the band invited the audience to drop by and say hello at the merchandise stand during the intermission. When the set ended and the lights came up audience members jumped to their feet and did just that.

After an intermission of between twenty and thirty minutes, while the PA system blared Chuck Berry's "Run Rudolph, Run" the Brian Setzer Orchestra appeared on the small arena's revolving stage. Treating the middle-aged crowd to an evening of exactly what they came for, the band delivered an evening of '50s and surf drenched rock and Christmas songs with a sly nod to the rockabilly sound that brought Setzer to prominence in the '80s with the Stray Cats. Opening with "Dig That Crazy Santa Claus followed by "Sleigh Bells" after which Setzer innocently asked, "How's it sound?," the band immediately got the crowd into the holiday spirit. In addition to the legendary single "Stray Cat Strut" (which Setzer called the first song he ever wrote when he told the story about his guitar on display in the Smithsonian), the band also played "Hip Cat Shakin' On A Hot Tin Roof" and "Boogie Woogie Santa Claus."

Intermingling Setzer classics like "Let's Shake" and Jump Jive and Wail" with big band versions of timeless classics like "Joy To The World" and pop holiday stapes like "Jingle Bell Rock, Setzer also showed his virtuosity on "Greater Doxology" more simply known as "Gloria," an amazing cover of Johnny Cash's "Ring of Fire" (before which he stated, "This is one I just love to play. Everyone loves Johnny Cash. Come on...you all love Johnny Cash. Well here ya go!") and the new rocker "Nothing Is A Sure Thing."

Setzer has a great rapport with his audience and his band. Often taking the time to speak to audience members as if they were family, the guitarist did the same with his band members and back-up singers. During what was undoubtedly a breather for the band and Setzer, he asked his two back-up singers what he could do for them. The girls promptly asked for "something sexy." After a few moments of back-and-forth repartee filled with innocent innuendo, the band and Setzer mounted an amazing version of "(She's) Sexy + 17" from 1983's Rant N' Rave with the Stray Cats (EMI America).

Because Setzer is a Long Islander (he hails from nearby Massapequa), shows at the intimate Westbury venue always feature special guests. On this evening, Setzer's brother Gary came out on stage and joined the band on drums. He, along with his sibling performed a mini set that included "Fishnet Stockings" and a jamming full band version of "Rock This Town." When the song came to an end, Setzer raised his brother's hand and as Gary retreated to the dressing room, Brian stepped up to the microphone and quipped, "My brother Gary kicked ass. Wait 'til I tell mom!"

It was then that Setzer and his orchestra proceeded to play the most ambitious piece of the evening. Setzer announced, "We'd like to play 'The Nutcracker Suite.'" The whimsical big band version of the would have made Tchaikovsky proud. Bringing it all back down to populist Christmastime music, Setzer and the band closed with a rhythm and blues party-pop version of "Santa Boogie." AS the last notes of the song rang through the venue the group left the stage.

It was however a temporary retreat backstage. Within what seemed like less than a minute, Setzer was back at the front of stage asking the musical question, "Did you say one more?" The crowd erupted as its favorite son played a deliriously energetic and fun version of "Jingle Bells" during which Santa Claus came down the center aisle hopped onto the slowly spinning stage and tossed small tchotchke to audience members while snow-like confetti fell from the rafters.

Setzer's 11th Annual Christmas tour performance was truly spectacular. The performances, musicianship and singing were all top-notch. Everyone on stage was having a blast and the audience was clearly having just as much fun as its members danced the night away. Though the audience was clearly comprised mostly of baby boomers, a 9 of 10-year-old girl was seen asking her parents, as they left their seats and headed toward the exit, "Can we go again next year?"