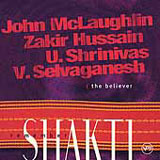 Will the real Remember Shakti please stand up? On its first live release, Remember Shakti was a serious-minded, bottom-ended, soul-searching ensemble. This time out, Remember Shakti raises its pitch. McLaughlin has an excellent foil in young electric mandolinist U. Shrinivas, who has created a whole new vocabulary for the instrument. Tabla player Zakir Hussain has his foil as well. V. Selvaganesh is featured on the kanjira, a tambourine-like instrument on which he can create sounds that would make some trap kit players jealous. (Note: Since a CD listener may not be aware of the physical exertion demanded of Selvaganesh on his chosen instrument, his virtuosity can be overlooked on this recording. To truly experience Selvaganesh's talent, you must see him perform live.)

The Believer sounds louder, brighter, and more light-hearted than Remember Shakti's first recording, which featured flautist Hariprasad Chaurasia and ghatam player Vikku Vinayakram. Of course, it has its serious moments as well, such as Hussain's touching tribute to his late father Ustad Allarakha through the music of "Ma No Pa." (The title also has another clever meaning for Indian musicians.)

Shrinivas is a real discovery for Western audiences. He is a wizard on electric mandolin, an instrument not known for its use in Indian music. He and McLaughlin play unison lines with the kind of precision and feeling that make these moments transcendent. Both players put their strings through a stretching routine which is genre bending. Importantly, Shrinivas seems quite at home soloing over Western jazz and blues changes. This is something that violinist L. Shankar, as great as he was with the original Shakti, never seemed to quite grasp.

As expected, McLaughlin sounds at home in almost any context. The superlatives have been tossed around too many times. But what does stand out, especially so in Remember Shakti, is his role as a teacher. This is not meant to imply that John McLaughlin, as a Western musician, has the capability to teach Shrinivas about Eastern music. Instead, it is quite clear that McLaughlin loves this music and passes its vitality and new heritage onto the younger player. Such a relationship is much clearer with Hussain and Selvaganesh. Make no mistake about it: Shrinivas and Selvaganesh are the future of this music.

It seems that percussionists often pay the price of being under-appreciated. In the Western world, listeners focus on the musicians who carry the melody. Zakir Hussain has proven through his various percussion projects and performances that there is more to his music than the melody. In fact, the truth is that in ensemble work the drummer or percussionist is of utmost importance. Zakir Hussain is essential to Remember Shakti, and for that matter, he is one of the most important percussionists in the world today.

The high point of the album is "Finding the Way" which appears both on the CD and on the included CD-Rom video. This idea of "searching" best describes the band's music. Unfortunately, as much as I like the classic "Lotus Feet," its appearance on two albums in a row is a bit much. Another tune would have been more appreciated.

So, after listening to The Believer, will you believe? Yes. The Believer is an outstanding CD that represents the best the worlds of Eastern and Western music can offer. That The Believer follows on the heels of its more serious-minded predecessor is a tribute to the imagination of the two elders of the band.

If you are lucky enough to get hold of the Special Edition of The Believer, you will have the opportunity to enjoy the CD-Rom video, which features two tunes. However, be warned that you'll need a speedy computer to get the best results.

5 In The Morning, 6 In The Afternoon; Ma No Pa; Lotus Feet; Maya; Anna; Finding The Way.