Quodia: The Arrow: A Story in Seven Parts 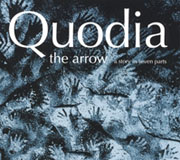 Transferring live multi-media projects to CD and/or DVD can represent a significant and often insurmountable challenge. Quodia—ex-King Crimson touch guitarist Trey Gunn and experimental keyboardist/founder of avante-popsters Rise Robots Rise (with Joe Mendelson)—clearly views recorded media as a distinct entity, but one that can work independently and in conjunction with live performance. The Arrow: A Story in Seven Parts is a modern parable blended with music that's both structured and open to improvisation. Live, it's a concert experience, a film experience and a theatrical experience, but its individual components can stand alone, despite taking on more significant meaning when conjoined.

The music is a compelling blend of hypnotically repetitive, almost minimalist motifs and primal rhythms, a variety of often soothing but occasionally jarring sonics and a narration largely by Gunn, assisted at various points, by a series of guests. While the text and Gunn's delivery aren't as dry as poet Rinde Eckert's spoken word for drummer Jerry Granelli's outstanding Sandhills Reunion (Songlines, 2005), the same attention to subtle nuance makes for a reading where the slightest hint of emphasis becomes surprisingly dramatic. With some of the music entering ambient territory, there's also some precedent with ambient pianist/composer Harold Budd's spoken word on By the Dawn's Early Light (Opal, 1991).

But while there are comparisons that can be made to other works, the music itself bears little resemblance. It's easy to hear (easier, in fact) Gunn's contributions to a decade of King Crimson recordings and performances here, where they're not competing with so much other sound for dominance. And while the overall textures of The Arrow are soft, augmented at times with natural sounds like that of a running stream, there are moments of Crimson-like aggression, most notably on the jagged industrial sounding "Thick and Thorny" which, coincidentally, features Crimson drummer Pat Mastelotto in a guest appearance.

That Gunn and Mendelson can create such a rich soundscape, for the most part, between just the two of them is remarkable, but in many ways the music itself is, if not incidental, only one of many means to The Arrow's integrated end. The entire cycle, with its episodic longer pieces, unfolds like an aural movie when combined with the written text.

The DVD simply expands on that cinematic experience by adding the projected images from the live performance alongside a beautiful 5.1 surround sound mix. Bonus features include a group of children providing audio commentary about what the piece means to them, as well as a montage of live performance photos.

It's rare that a concept this expansive manages to work on every level and in every sensory form, but The Arrow succeeds as an audio-only CD, as a DVD that incorporates animations and printed words for emphasis and, no doubt, as a concert experience with its added theatricals. On all fronts it's completely captivating and an undeniable triumph.

CD: Part One: We Begin With a Woman; The Arrow; A Boy Comes By. Part Two: Sitting on the Bank; Thick and Thorny. Part Three: I Saw Two Hands. Part Four: When the Fire Was Slow; He Stood in the Rain; Set Loose Upon the Water. Part Five: Water Woman; Part Six: The First Sign; Chained. Part Seven: After the Village. DVD: We Began With a Woman; Sitting on the Bank; I Saw Two Hands; When the Fire Was Slow; Water Woman; The First Sign; After the Village. Extra Features: Quodia Live Photos; Water Woman (Spanish), Water Woman (Russian); Children