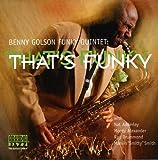 Looking back past the rule of Parliament to the age of Horace Silver, Benny Golson’s That's Funky pays tribute to Louis Armstrong through two renditions of his popular favorite "Mack the Knife." While the opening "funky version" starts off a bit sluggish and includes some pinched soloing by Nat Adderley, Monty Alexander’s firm comps make it swing and Golson’s smooth lines give it at least three pennies worth of class. On the "modern bebop version," Adderley’s lines are much more reminiscent of Satchmo’s muted melodies. Tributes to Golson’s Jazz Messenger cohorts include a punchy cover of Lee Morgan’s "Sidewinder" and an island-tinged take on Bobby Timmons’s "Moanin’." Adderly’s "Groovy Thing"-inspiring "Work Song" is a groove-y workout for the horns backed by Ray Drummond’s prowling bass and Marvin "Smitty" Smith’s rumbling fills.