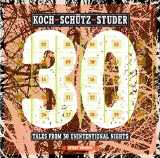 Hans Koch (reeds, electronics), Martin Schuetz (electric 5-string cello, electronics) and Fredy Studer (drums, percussion) come out of an area of the music in which the parameters are defined as much by a noise-rock tradition as they are by anything closer to improvised music as such. There is of course nothing intrinsically wrong with this, but when the music seems pervaded by a kind of reductive nihilism it does make listening something of a chore.

It starts promisingly enough. The musique concrete of "9/10 (for Daniel & Jean-Claude)" is tantalizing in terms of what it fails to deliver, drawing the listener in with the promise of something spectacular to come. It's also one of the infrequent occasions here when Hans Koch's reeds are readily audible, albeit in reductionist form.

"9/26 (for Evelyne)" however highlights a certain paucity of imagination in its echoing of precedents, established by the likes of King Tubby. In resorting to such seeming emulation, with Martin Schutz's cello echoing the kind of pliant bass fashioned in radically different circumstances, the odd effect is of improvised music that sounds a whole lot less spontaneous than one of Tubby's glorious studio-generated melanges.

"9/28 (for Peter)" is again hidebound by the kind of constraint that's customarily antithetical to improvised music. Schutz generates a monstrous riff on his cello that Koch works around before drummer Studer applies a back beat, only for the whole thing to break down in a passage that amounts to one of the infrequent moments of quietly compelling music. When that's resolved in another reverberative passage in the opening of "9/21 (for Markus & Silvio)," the attention soon strays again, not least because the musicians add nothing new to the precedents they're evidently in thrall to. That said, Koch's bass clarinet has its moment but proves only teasing with its intimations of more creative vistas.

"9/25 (for Christine)" could be evidence of an almost infantile desire to shock. It comes on like a pastiche of Sonic Youth's infinitely greater capacity for deconstruction and is manifested here through a modest wall of white noise.

The notion of creative nihilism might amount to a contradiction in terms. But it's a viable one for which there are examples on record: Peter Brotzmann's Machine Gun, Derek Bailey's work with the Japanese bass/drums duo Ruins and the like. This however isn't an addition to that select canon. Instead, it's music that often seems to do no more than hang in space, too certain of where it's coming from to have much idea of where it might be going.