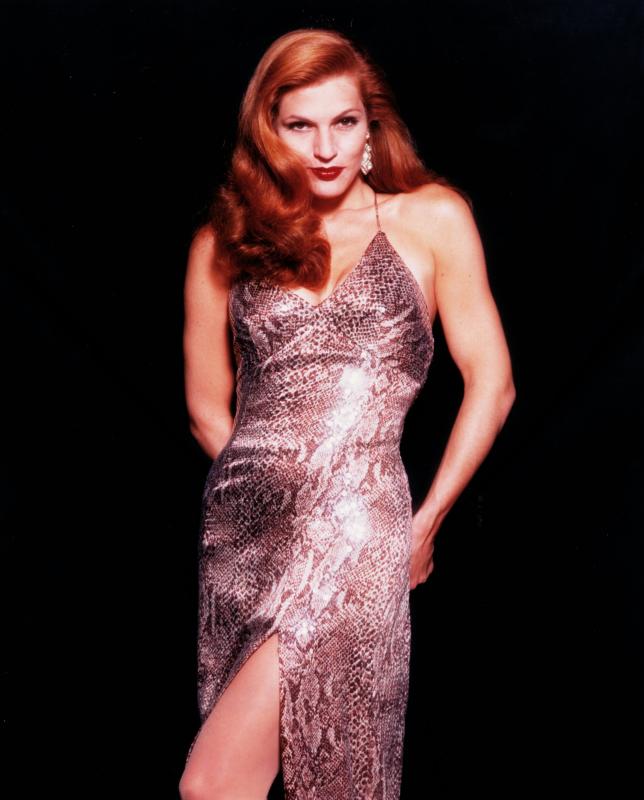 Quinn Lemley star of Burlesque to Broadway and The Heat Is On!, a life in concert celebrating Rita Hayworth, an avid jazz singer of standards.

Quinn has been performing her shows around the US and Canada, in performing arts centers and casinos to "ovational roars."

Quinn performs her jazz show, Sexy, Smokin' Standards, in New York City at BB King's Blues Club and is thrilled to be "the iconic face" of The Half Note Jazz Club in Athens Greece for her hit jazz show. Her shows have toured Greece, Switzerland and China.

Quinn has recorded six CDs for HepCat Records, including Sirens, Songs of the Silver Screen, Cocktails With a Twist, Dance or Die, The Heat Is On! and Live! At The Half Note.

The iconic glamorous entertainers that influenced the standards and embodied the lyrics. Such as Eartha Kitt, Cher, Bette Midler, Ann-Margret, Ella Fitzgerald, Frank Sinatra, Julie London and Michael Bublé, to name a few.

I came out of the womb singing. Probably because my mom played jazz, standards and show tunes to me when she was pregnant. My grandmother, Granny Lemley, made sure I heard all the great crooners and big bands by the time I was 10. I was hooked on the standards.

Tell a story. Lyrics are so important. You have to take the audience by the hand and take them on a journey.

Tell the story. Get out of your way. Do something every day to add to your craft.

I would love to work with Michael Bublé. He is a master. And, of course, it would be a dream to work with David Foster. He is a genius.

The seven-hour drive from New York City to Buffalo is gorgeous. Fall colors, tons of trees looking like multicolored broccoli with its unspoiled landscape. There is nothing for miles not even gas stations, only the occasional McDonald's. We were a half hour on the highway from Buffalo when all of a sudden the wall of the tire went out. Paul, our brilliant manager, calmly and safely got us to the side of the highway in the middle of nowhere. The van was lopsided. We piled out of the van; the weight of our equipment and luggage was intense. He was on the phone with AmCar, who insisted we buy a new tire and change it and bring the old one back. Where were we going to put it? How were we going to change it? Luckily, our horn section was "guy guys." Bradley, our trombonist, came to the rescue with the help of the other horns. Now, I am a workhorse and Merete, our choreographer, is a true taskmaster who didn't miss a beat; she had the girls and I on the side of the highway rehearsing the choreography. A 5,6,7,8! Trucks were swooshing by, honking; people yelling encouragement....Paul and Brent, our Musical Director, never one's to miss a PR opportunity, snatching pics. We were making a splash!

Once the tire was on, we piled back into our Muppet van and headed to the Hotel Indigo for check-in. An hour later we were at the historic Riviera Theatre in North Tonawanda. Built in 1926 as a vaudeville house. You could feel the theatre ghosts of the past as we stood on stage looking out into this gorgeous purple 1400 seat theatre with pink, white and gilded walls, a huge chandelier and an actual working Wurlitzer Organ. Every night before the show, a grouch with a handlebar moustache would come in, a half hour before the show. Quite a character, he would rip open a worn saddlebag and play music on the organ. It was glorious.

Now, traditionally, in the old days, shows would try out in Buffalo before going on the road or bringing a show to New York. The theatre was built in the '20s and the soundman had trouble with our modern body mics—his rig was from another era. So in rehearsal ,I had to keep making sound, so I told every corny joke I could think of. You never think anyone is paying attention at times like that, just focusing on sound quality and being able to hear in the monitor.

Well, our shows got standing ovations and wonderful press. Buffalo is Merete's hometown, she had an amazing feature as the cover story in the local Buffalo News. Saturday night was packed; we were on a roll till we get to the end of the show. The girls and I are singing Tom Jones' "She's a Lady." I hear the girls, "whoa whoa," "Whoa, whoa"—there's nothing coming from my mic. The theater was on a tight budget, so there were no stage managers on the stage. Paul runs down the aisle of the theater from the sound booth at the back of the house, runs onstage with a handheld mic and somehow I finished the number not missing a beat with the handheld.

The dilemma, the next number was a Sally Rand "Fan Dance<" with two huge heavy pink fans, where I sing, dance and peel off my costumes with the girls. Now, now! After all, it is a burlesque show! My mic pack was underdressed underneath all the layers of clothing under my fishnets. How was the soundman going to get from the booth, re-rig me and not lose the audience? I started vamping, joking about technical malfunctions; then the band yells, "Tell them the mushroom joke!" So I told the audience, "A mushroom goes into a bar and orders a drink. The bartender says, "I'm sorry, but we don't serve your kind here." The mushroom looks up and says, "Why not? I'm a fungi!" The drummer gave me a crash, a "bada boom" and the band started riffing on "Makin' Whoopee," as I shuffled stage right into the wings. In less than a minute I was center stage back in action. It brought down the house!

Standing ovations, the audience stayed. I think they feel even more connected to the performers when there are technical issues. The lesson learned? The Golden Rule: always> have the soundman change the batteries and always wear a second pack. I guess, when you are going to develop your show, you shuffle off to Buffalo! (bada boom!).

The Kravis Center in Palm Beach, FL—a jewel of a theater, the best staff ever.

Cocktails with A Twist; they are some of my favorite songs ever.

Lena Does Latin at The Sands, Lena Horne.

Taking the audience on a journey. I am an entertainer. Music is an international language and it connects us all worldwide. My music and my shows have played around the world, the music has connected me and my band with people everywhere.

I make the best soufflés, especially chocolate, thanks to James Beard and my parents.

Diana Krall, The Look of Love.

Exposure to younger audiences at young ages. Education. Programming more jazz in mainstream media and venues. More funding to get the music out.

We have an exciting tour lined up this spring starting with The State Theater in New Brunswick, NJ March 1st and ending in Montreal, Canada on May 31st and June 1st in Montreal at the Theatre Corona Virgin Mobile. I'll get to practice my French!

I love sharing this big band pop sound all over the country. Audiences are on their feet, so we know we are connecting with them. It's exiting. Plus I have the best creative team. It is so much fun!

This year we will tour all over and plan to record a CD of Burlesque to Broadway.

That I'll forget the words; that I won't connect.