Jaki Byard: Sunshine of My Soul: Live at the Keystone Korner

By GEORGE KANZLER
March 8, 2008
Sign in to view read count 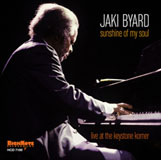 Pianist Jaki Byard (1922-1999) is the first one you hear on 2007's great vault discovery, the previously unheard Charles Mingus Sextet with Eric Dolphy, Cornell 1964 (Blue Note). A favorite of Mingus, who famously disliked most piano players, Byard played with a wide range of jazz musicians and was an acclaimed teacher whose students included Fred Hersch, DD Jackson and Jason Moran. And as the music/jazz teacher at the Music Critic Association/Smithsonian jazz fellows seminars/workshops in the early 1970s, his highly eclectic, historical approach impacted a generation of influential jazz critics and writers.

But Byard was at his uninhibited best as a solo pianist and this CD unearths a sterling solo set recorded in 1978 at a San Francisco jazz club. It's too bad this isn't an LP disc, because it would be fun to be able to just drop a needle at random midway through, or among, different tracks. That exercise would be both fun and puzzling. Fun, because you might hear modern, swing, stride, boogie woogie or classical bravura—and all of it with a suggestion of tongue-in-cheek. Puzzling, because without knowing this was all one pianist, you'd think a dozen had contributed to the album—at least two of them Marx Brothers.

Byard was an encyclopedia of jazz piano styles, summoning them up at will, but always with his own unique, sometimes zany, sometimes dramatic, twist. The only style missing here is his Erroll Garner, only hinted at fleetingly, but something he could ride gloriously through a whole song from a guess-what's-coming intro to flowery finale. Here he hits all the other highlights, from the opening "Tribute to the Ticklers" homage to ragtime and stride rent party pianists to the closing "European Episodes," a variously striding and thundering pasquinade of the likes of Liszt and Chopin as imagined by Fats Waller. He makes a triumphant lyrical burlesque of "Besame Mucho" and a jazz curio masterpiece of Blood, Sweat & Tears' rock anthem "Spinning Wheel." And donït miss his ïMingus Medley," a ferocious tribute.