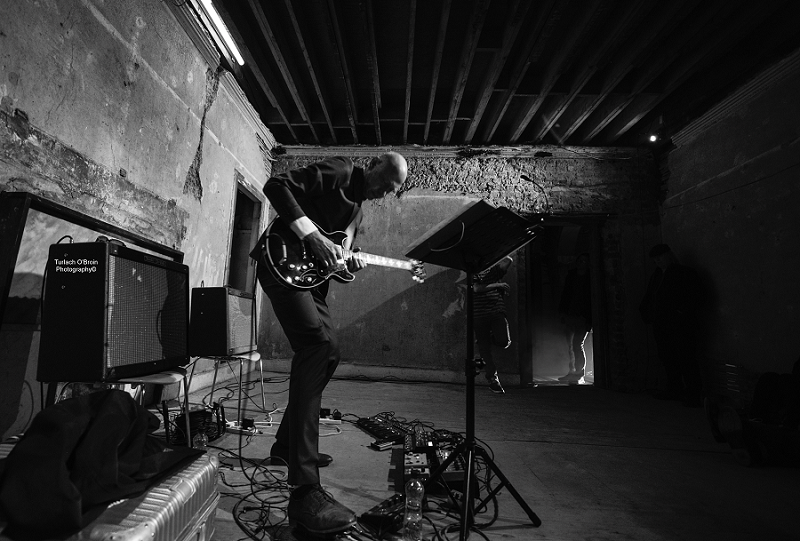 String Theory, a two-day celebration of avant-garde guitar craft was no ordinary festival. The fact that the music was experimental, largely improvised and inherently risk-laden isn't what set this inaugural Dublin festival apart, after all it's what we've come to expect from co-promoters Improvised Music Company, Note Productions and festival curators Bottlenote Music—a collective of renowned local and international musicians.

The special player in the mise-en-scène was the venue. 13 North Great Georges Street may sound like a residential address, and it is, or rather was, for this once splendid four-storey Georgian edifice had clearly seen better days. While almost identical buildings in the same street fetch seven-figure sums, you'd likely need to spend that kind of money to restore the interior to its former glory.

An impressive wooden staircase led to large rooms all but devoid of furniture, except for a sofa of indeterminate vintage and a weathered piano in one room. Naked brick showed where wall plaster had crumbled. Ceilings had given way in random patches, exposing the skeleton of wooden beams. Wallpaper was faded and curling. The solid wooden floorboards were shorn of polish and stripped of carpet.

There are probably better appointed squats in some parts of Dublin.

That said, there was something wonderfully romantic about the old house, which boasted a hell of a lot more character than your average concert hall. There may have been ghosts present in the cellar, drifting in the dark hallways or haunting the high-ceilinged-rooms and attic, but if so they were benign enough, for there was an undeniable warmth about this house, unusual for one with nary a stick of furniture.

For several years now the owners have allowed 13 North Great Georges Street to function as an ad hoc cultural centre and it seems to be putting down roots. In a downstairs room an exhibition—inevitably on 1916 and all that—was running and photo shoots and pop videos have been shot in the skeletal yet atmospheric surroundings. In September 2015, Bottlenote Festival took over the rooms for three days of improvised music, with special invitee Ernst Reijseger joining local musicians including Sean Mac Erlaine and Justin Carroll.

For the two days of String Theory—this article covers the second day—the second and third floor rooms resonated to the imaginations—conducted through strings and transmitted through powerful amps—of some of the most adventurous guitarists/sound sculptors in contemporary music. Three performances from 7.30pm and another three from the same musicians 9.30pm meant that more punters were able to experience Dublin's latest cutting edge music feast.

The names of the performers were pre-advertised, of course, but little else about String Theory conformed to what is generally expected from a concert setting. No introductions to the musicians were made at any time and rather than wait for the festival goers to gather before commencing, the music instead lured the attendees, siren-like, from one floor to the next and from one room to another in a seamless flow of music and movement.

The first strains of amplified string vibration came from a dark room on the first floor, with a forest of glowing light bulbs suspended from a yawning hole in the ceiling. From left to right, sculptor/musician Karl Burk, leader of OKO and Bottlenote founder Shane Latimer and drummer/percussionist Sean Carpio greeted the arrivees with a dense wall of sound, drone-like and undulating, the three electric guitars spewing electronically altered, pedal- skewed sounds of both industrial harshness and gently coursing beauty.

The juxtaposition of minimalist yet powerful sonic contours suggested the soundtrack to a dark sci-fi epic, simultaneously terrifying and beautiful. After twenty minutes the lights faded, leaving the musicians statuesque in the dark. At the same time, from the adjoining room, the sound of heavy metal guitar from a radio lured the crowd of thirty or so people into an entirely different sound-world. At the controls, hunched over a small desk, was veteran UK electro-acoustic experimenter Keith Rowe. Armed with a practise guitar neck, a couple of electronic boxes—one of stored music and the other a wireless of sorts—and a beach-combers heaven of found objects, from pebbles and flint to pegs, springs and chain, Rowe's highly individualistic music offered a provocative commentary on the nature of improvised versus recorded performance, of memory, the known and the unknown and the art of listening.

Between bursts of static hum the wireless picked up fragments of an Indian folk song. Indeterminate pulses, little electronic belches, percussive scratches and murmurings then paved the way for a pre-recorded piece of baroque music that circled hypnotically. As the classical music faded out, more contemporary sounds drew everybody up a flight of stairs where Frank Mobus of Wired Paradise fame sonically commanded another room.

Suitably dressed for the Irish climate in flat cap and buttoned-up raincoat, Mobus gradually coaxed his guitar strings as though gently from slumber, skipping from one pedal to another to effect textural changes. A soft, organ-like drone underpinned the guitarist's initially jagged stuttering and then more fluid bursts, though space was an integral part of Mobus' orchestration. A riff eddied for a brief minute, suggesting an imminent new departure, but it's fairly abrupt end also signalled the conclusion of the performance.

Back down a flight of stairs the mobile audience headed in response to yet more curious sounds. In the same room where Keith Rowe had cast the most curious of spells, Norwegian Stian Westerhus beguiled with a show that underlined his reputation as a modern innovator of solo guitar performance, earned with albums such as Pitch Black Star Spangled (Rune Grammofon, 2010) and The Matriarch and the Wrong Kind of Flowers (Rune Grammofon, 2012).

Westerhus' performance ended and the lights came up. With no backstage as such, artists and audience found themselves suddenly facing each other feet apart in another moment that strayed from performance norms. The proximity invited social interaction between Westerhus and a few curious audience members, though with a second round of shows due most people filed out.

An hour or so later, another group of around thirty people assembled in the entrance hall of 13 North Great Georges Street and made the same journey as the previous group of sonic adventurers. If conceptually little changed in the second round of performances, there were notable changes in content. Though that was perhaps to be expected from improvising musicians, it was not necessarily a given, considering the tendency of memory muscles and even the temptation to follow paths and patterns successfully trodden just an hour previously.

Burke, Latimer and Carpio, and Mobus, all burned with greater intensity than first time around, as though their first performances had sign-posted the sort of terrain they wished to explore from the get-go. Westerhus plunged headlong into a powerfully meditative sound-world, with Crudden's laser projecting a psychedelic rainbow on the walls. Industrial thunder followed, though Westerhus' dreamy vocals applied a closing sonic balm to any bruised ears present.

Rowe's second performance began with minimalist creaking noises over a humming drone. Soon, a pre-recorded segment of the stunning aria "Dido's Lament," from Henry Purell's opera Dido and Aeneas sounded. As Dido sang "Remember me, but ah, forget my fate," Rowe broke the so-called fourth wall, that invisible barrier separating performer and audience: "When we do what we do, when Caravaggio paints his paintings, when Samuel Beckett writes his plays, is it that we want to be remembered? A way of becoming immortal?" Rowe asked rhetorically. "Is Caravaggio an exquisite piece of graffiti?- -I was here."

Nobody, it's true, ever daubs, scribbles or carves "I am here"—and for good reason.

In a performance where Rowe seemingly didn't touch his table-top guitar, he managed to strike an intellectual chord that may resonate still. Everything fades. All memories fade too, and the desire for permanence is but a cruel irony of the human condition. In a revealing 2009 interview with All About Jazz's John Eyles, Rowe cast light on the dynamics of performance and the role of the audience: "There is a sense in which the audience actually produce the music, not you. You are in the space, and the people are in the space with you. We're all in this space now. You can pick up a lot on them, on what they are feeling, how they are concentrating. So their concentration for example will allow you to develop material and extend material."

The ephemeral nature of live music, and especially the never-to-be-repeated character of improvised music only increases its value as something unique, something perishable to be cherished, where the audience is somehow a protagonist. Even in its most abstract, abrasive, angular and challenging moments—and there were plenty during String Theory— improvised music is no mere sonic graffiti but a deep-rooted desire to self-express and perhaps even to communicate -albeit for a fleeting moment or two.