By DAVID RICKERT
August 9, 2002
Sign in to view read count 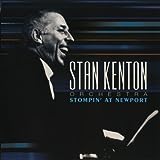 For Stan Kenton fans this CD is legendary, rumored to exist but never released. Simply put, Norman Granz recorded one of the finest editions of the Kenton band at the 1957 Newport festival, but the recording was never issued until now. Stompin’ At Newport is a fairly comprehensive overview of what Kenton was up to at the time, with classic tunes such as “Intermission Riff” and ”The Peanut Vendor” interspersed with more recent experiments such as “La Suerte De Los Tontos” from the Cuban Fire album. Kenton always had a knack for writing lively charts filled to the brim with punchy horn riffs, and the band seems positively invigorated by the live setting. Several key West Coast players, for whom a stint in the Kenton band was seen as a rite of passage, handle the spotlight on the ballads, and Bill Perkins and Lennie Niehaus are more than up to the task, showcased on "Yesterdays" and "The End of a Love Affair" respectively. There is also more of Kenton on the piano than one might expect, the bandleader taking long introductions to “Intermission Riff” and an occasional solo or two. For the most part, Kenton’s studio recordings are an uneven affair; the Newport set samples the best and serves as a worthy introduction to one of big band’s greatest talents. Those who are more familiar with Kenton’s work will welcome this addition to the catalogue.

The Opener; Artistry in Rhythm; Stompin' At the Savoy; Yesterdays; Intermission Riff; 23 Degrees North, 82 Degrees West; Everything Happens To Me; The Peanut Vendor; The End of a Love Affair; Young Blood; La Suerte de los Tontos; The Big Chase.