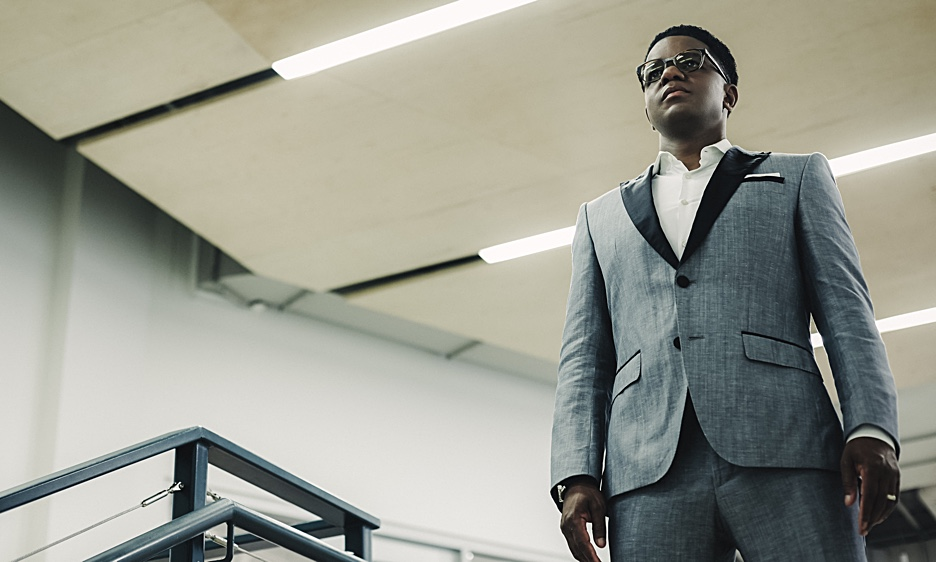 Music, particularly jazz, happens to be a phenomenal platform to share the message of the power and potential of empathy to affect positive change in our world. —Stefon Harris

Because that's not enough for the 45-year-old, he's also a successful educator, public speaker, entrepreneur and an eloquent interview. He and I spoke last week about his upcoming Blackout album, Sonic Creed.

All About Jazz: "Dat Dere," that's a pretty brave place to start.

Stefon Harris: Each of the Blackout records begin the same way. We take a classic piece of jazz repertoire, and we put a Blackout spin on it. Our first record, we started with "Nothing Personal," which was one of those tunes that everyone was playing around New York. There was a specific way that it was generally played, so we thought that that would be a great melody for us to put our unique groove on.

The second record, Urbanus, we started with "Gone" from Miles Davis' Porgy & Bess. We ended up putting a go-go groove on that because that's a reflection of D.C. culture which is where Marc Carey is from.

So this record, because I'm so dedicated to education right now—I'm spending the majority of my time right now focusing on education—I decided to do the song "Dat Dere" as a tribute to someone who I believe to be one of the forefathers of jazz education: Art Blakey. He's generally not spoken about in that manner. Many times people think about the forefathers of jazz education and they think about the people who are running institutional programs or began those programs. But jazz education began in the clubs really. It began in the communities and in the culture of the people. So I chose that piece as a platform to talk about the brilliance of people like Art Blakey, Barry Harris and Dizzy Gillespie—all these iconic educations where were never a part of major institutions.

AAJ: Do you think Blakey's been given his due over the years?

SH: Certainly as a band leader. He's been acknowledged as being one of those people who understood how to pass the culture of the music down to the next generation. He also understood just how vital a role that was. Of course he's gotten credit there, but I've rarely heard him spoken about as an educator.

Sometimes being an educator doesn't mean that you're communicating about scales or modes. Sometimes being an educator means you're putting people in difficult situations and helping them obtain the tools they need to fight their way out. When I speak to people who played with Art Blakey and I hear the stories ... it seems to me that the most pivotal moments in their artistic development are deeply connected to Art Blakey and the experiences that he created. People learned how to dig deep and how to deliver from playing with someone like Art Blakey.

AAJ: Did Buster make you want to be a teacher?

SH: Ever since I was a child, I've always wanted to be a teacher. It is as much my passion as playing. At my core, I'm dedicated to communications and in particular in communicating the importance of empathy in our world. Music, particularly jazz, happens to be a phenomenal platform to share the message of the power and potential of empathy to affect positive change in our world. In many ways, I find teaching to be more of a creative challenge than playing.

ADVERTISEMENT
AAJ: Empathy is in pretty short supply these days.

SH: Well said. I do feel fairly confident that in order for us to continue moving in the right direction, we're going to have to listen to one another first. Before throwing out opinions, we have to understand the people on the other side. Because people don't do well when they don't feel they're being heard. They'll usually shut down and silo themselves.

The exact same thing happens in art. When you don't understand how to listen to the rhythm section and react to them, basically the rhythm section goes on automatic pilot. The drummer will just keep time for you. The pianist will just comp the chords that are written on the page. And you don't really get the beauty of their unique personalities if you don't know how to listen and create a platform for them to express themselves. When you do that, the music is far superior because it becomes a reflection of the entire community of musicians who are on the bandstand. As opposed to the singular idea of the leader.

This is why I think the greatest leader in jazz history, and certainly the person I admire the most as a leader, is Miles Davis. When you look at his bands, they were made up of incredibly diverse artists who thought differently about the world, who moved differently through the world and were always allowed the creative space to express themselves. It's evidenced by the fact that when you look at the people who came through Miles Davis' bands, they all became iconic figures. The same is true of Art Blakey.

AAJ: I don't think a lot of music fans would be surprised to hear you say that it has the power to express and encourage empathy. But what is it about jazz in particular that promotes a more empathetic view?

SH: It's the acceptance and embracing of uncertainty. At our core, that's what we do. Jazz ultimately was created to be a platform for marginalized people in this country who didn't have the opportunity to express their beauty, to express their intelligence, to express their love for one another. You would've been killed if you told someone you knew how to read a book.

The only time that you would've been able to express your authentic self would've been on Sunday in church when you were left alone. The way it was done, was in song. So when you look at the development of art, particularly jazz, and its lineage coming through the black church, you realize there are moments where people stand up to tell their truth, to sing the pain that's on their heart. It's not about the intellectual capacity of the person delivering the narrative. It's ultimately about the authentic telling of the story. And then what happens is you have your moment and the congregation, the community, is there to support and encourage you to say whatever you need to say. And if that's the one time in every week that you get to sing the truth, you better believe you're not going to stand up and copy someone else, or imitate someone else's story. You're going to tell your truth.

But then, you learn that it's your turn to sit down and support and listen to the next person. So by design, at its core, it's a science of empathy. It's all about supporting one another and amplifying other people's voices, including your own. When you do that, there's a beautiful message about the strength that's contained in diversity. When you have diversity of thought, what happens is there's a gap in between. Particularly when you have people who see the world in completely opposite ways. That's an amazingly beautiful thing in jazz. We want conflict because then we start to dig into the spaces in between those potentially brilliant ideas. And the space in between those brilliant ideas is where we find innovation. It's where we find creative ideas that are so far beyond the mind of any one individual. It can only come when you have diversity of thought.

That's why our art form is so special. That's why it's valuable to the world right now. We have a message that can help our political structure, that can help us understand how to bridge the gap between completely opposite cultures. Whether it's in the religious world, political or economic. The discussion is how do you deal with conflict. We do it every single time we step on the bandstand. There's a beautiful methodology at the heart of it that has absolutely revolutionized my life and the way that I maneuver through the world.

AAJ: How can jazz and the jazz community be most effective in contributing to that larger dialogue that's going on right now?

SH: First of all, we have to get beyond the notion that it's all about the creativity of the individual. I don't think that musicians are any more special than mechanics, cooks, janitors or politicians. We all have an obligation to be of service to society. The first step for us as a community is to understand our purpose. I believe that our purpose in society is to be sonic griots. We're supposed to tell the stories of what's happening in our communities right now. That's why the music was always so significant because you had these marginalized voices in the U.S. that no-one was hearing. Jazz was the platform that helped people understand what was going on in the world. It helped people understand how to listen to every perspective without judgment—how to accept and how to be inclusive.

Once we understand that that's our purpose, then we can start to communicate to a broader swath of our society about these topics. We really are, in many regards, experts in the science of communication when it comes to improvised music.

AAJ: Let's go back to the start. You said your cover of "Dat Dere" featured the "Blackout spin." What's that mean?

When you hear John Coltrane or James Brown for that matter, you hear the political strife of the late 1960s. You hear the social passion for justice and equity in the sound of their music. That's because that was what was happening in the world at the time. And the same is true if you go back to Picasso or Schoenberg. ... So the art is always a reflection of what's happening now. When I take a look at what our responsibility is as an ensemble, Blackout is supposed to be a reflection of the individual culture of every person in the band.

James Francies played in the church. If that's an element then that's going to be there. I grew up in the church also, but I spent a lot of time playing classical music. That was the primary form of music that I played until college. So you'll hear in my writing a lot of those types of influences with regard to phrasing, structure and form. And then we have people who play hip hop, gospel. So when you hear any of our music, it's supposed to sound like our life experiences, not Charlie Parker's. Because Charlie Parker did a really good job documenting the world that he was exposed to. It's our job to honor the great legacy that he created by doing the same.