BY AAJ STAFF
December 22, 2003
Sign in to view read count
By far South Africa's biggest and most influential jazz record label, Sheer Sound has made a point of documenting both veterans and up-and-comers from all over the country and beyond. From traditional African sounds to modern folk music, from chill-out jazz to the avant-garde, the label has made its mark. Recent highlights from the label include Zim Ngqawana's uncompromising Vadzimu , a virtual tunnel through South African musical history; and Hotep Idris Galeta's Malay Tone Poem , a tight post-bop romp.

This year the label marked its ninth anniversary and its hundredth release, Sipho Gumede and Pops Mohamed's Kalamazoo 4. It's also licensed a generous heap of records, including two from Zimbabwean artists. This review will touch on six records culled from both catalogs—generally mellow in tone, but not without a few energetic moments. 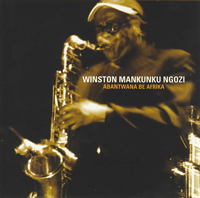 While legions of South African jazz artists left the country in the '60s to escape apartheid, saxophonist Winston Mankunku Ngozi stayed home, and he paid a heavy price for his choice. Expatriates like Abdullah Ibrahim and Hugh Masekela circulated within American and European jazz communities, earning exposure and recognition. Mankunku labored under a regime which restricted his personal and musical freedom, sometimes performing under a psuedonym or behind a curtain. But his 1968 record Yakhal' Inkomo stands as one of the greatest masterpieces in South African musical history.

In contrast to that forward assertion of identity, Mankunku's music has become much more soft and meditative in recent years, with Molo Africa (1998) an optimistic highlight. The brand new, all-acoustic Abantwana Be Afrika ("Children of Africa") represents a return to roots, a middle ground for the saxophonist, with ten traditional jazz cuts in a (mostly) quintet setting.

His band brings together heavy hitters from the present day, most notably pianist Andile Yenana, whose firm but understated support recalls similar '60s efforts by McCoy Tyner and Herbie Hancock. Drummer Lulu Gontsana has an unerring sense of swing that regularly adopts light shades of Latin and funk styles. And Mankunku himself sounds calm, self-assured, warm, and articulate. The title tune (with vocals and a melody that beckon "Children of Africa" to dance) has an irresistibly catchy groove; the other selections tend to be more serious and reflective.

Abantwana Be Afrika represents a dramatic return for Winston Mankunku Ngozi, a reminder that he hasn't forgotten his roots or lost the ability to express depths of emotion through deceptively simple words. 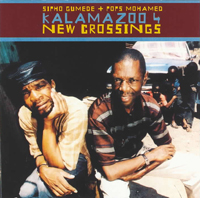 The fourth installment in the Kalamazoo series, launched in 1991, presents a collection of ten user-friendly jams that neither sizzle nor sink, huddling together on a spacious middle ground. Long-term collaborators Sipho Gumede and Pops Mohamed produced this record on their own (home studios and all), and the sheen of the record betrays their close attention to detail. Whatever conclusions you may draw from Kalamazoo 4, it's a definitive personal statement.

Pops Mohamed has released a string of records on B&W, MELT 2000, and Sheer Sound where he's employed traditional (what some might call "ethnic") instruments from around the world to introduce organic sonorities into an otherwise modern landscape. The combination is distinctive, and while his output has been uneven, its high points reveal a lot about the relationships between our past and our future. The acoustic collection How Far Have We Come? (MELT 2000, 1997) offered a memorable globetrotting vision of world music.

Unfortunately that vision is not really present on this recording. Instead, Mohamed mostly lurks in the background programming beats and introducing keyboard textures. His efforts in this regard (joined by Gumede throughout) are competent but hardly remarkable. In the end they're probably the main reason for the record's accessibility, since they serve as platform and guideposts for the instruments that float on top: Moses Khumalo's gliding sax, Xoli Nkosi's bluesy piano, and Thabo Mashishi's eager trumpet.

Kalamazoo 4 keeps the melodies perky and hummable, usually in some sort of call-and-reponse format, packaged in an easy groove. Solo space is quite limited because of the expanded arrangements, but Sipho Gumede comes through with some outstanding bass work. On the title track ("New Crossings") the reduced instrumentation gives him a chance to stretch out and sail free. Whatever his talents in the realm of production, his most dramatic presence on the record comes through when he picks up his axe.

This is not a jazz record in the traditional sense. It's a thoroughly produced package with catchy grooves, acoustic and electric instruments, and a whole lot of studio effects. Very, very friendly and an open invitation to dance. 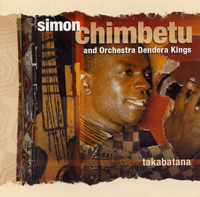 Along with Oliver "Tuku" Mtukudzi and Thomas Mapfumo, rumba singer Simon Chimbetu has established himself as something of a star in his native Zimbabwe. Chimbetu started out with four of his siblings in a group called the Marxist Brothers, then went on to pursue a solo career with a series of records on the Gramma label. Sheer Sound has picked up Takabatana, presumably a recent recording but minus any information as to its origins.

It's great music, bursting with optimism and positive energy. The interlocking guitars and bass weave a tapestry that simultaneously recalls traditional Shona mbira (thumb piano) and West African highlife styles. The lyrics are (presumably) in Shona, so unless you're a native speaker you'll probably have to pick up the energy from Chimbetu's punchy, cascading voice, interspersed between passages of vocal harmony and rippling guitar lines. Takabatana is infectious and highly danceable stuff.

For lyrics in Shona visit ShonaLyrics.com 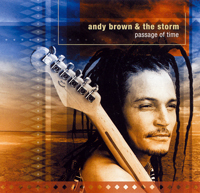 This Storm has been pushing forward for fourteen years and Andy Brown isn't going to quit any time soon. Passage of Time is the group's tenth record on ZMC and a sure-fire call to celebration. Like other contemporary artists in Zimbabwe, Brown uses electric instruments and modern production to update traditional Shona music. Acoustic instruments like the marimba meet up with his guitar (acoustic or electric) in swirling waves of sound, framed by horn fanfares and call-and-response vocals.

It's often hard to figure out exactly who's playing what because the notes interlock in dense syncopation, but in the end there's no point to intellectualizing the music. In the most traditional sense, it's all about trance. The instrumental figures are highly repetitive (between interludes) and the overarching rhythms are perfectly regular. The rich vocal harmonies of South Africa seep across the border, along with easy, softened production. Andy Brown's update to Zimbabwean music retains all the earthiness it needs to ground these positive, upbeat songs. 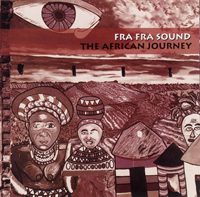 Bassist Vincent Henar leads Fra Fra Sound, an international septet originally formed in Amsterdam in 1980. Between the Sound and the Big Band, these evolving groups have amassed a pile of ten records, and it would be hard to imagine a broader array of influences. Jazz improvisation forms the meat of the music, but it's sandwiched between some hefty buns. Four continents of rhythms and styles are represented here, most prominently drawing from West Africa and the Caribbean, which isn't all that surprising given Henar's roots in Surinam. Regardless, it's nearly impossible to sort out which parts go where, and in the end there's no point in chasing down all the details.

This collection includes twelve upbeat tracks from records dated 1990-99, entirely unlabeled as to their sources. "Queen of the Shebeen" comes from the 1996 release Global Village Residents. Saxophonist Efrain Truhillo offers a soft introduction before the group dashes off at a brisk pace into interlocking rhythms and swinging fanfares. Truhillo returns for a hard-blown solo that pushes hard at the boundaries imposed by the otherwise tight group. And that's as good a formula as any you'll find for this music. Fra Fra's cohesion is remarkable given the music's density and drama, but the group uses improvisation to loosen the screws just enough to make the music fun. 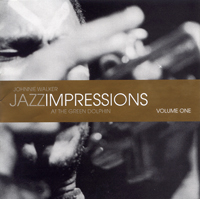 First things first. Subtract the corporate sponsor from the title, put the Green Dolphin in bold, and then it's about right. Cape Town's Green Dolphin Restaurant is a regular host to local jazz talent, and this collection puts the spotlight on performances by six groups. Two names recur in the various configurations: drummer Kevin Gibson and multi-instrumentalist Andrew Lilley. Together with guitarist James Scholfield, they form the funky organ trio J.A.K., which is responsible for one helping each of Nawlins-flavored funk and hard-stepping swing. Outside more traditional jazz settings, Gibson shines. He injects some serious popping energy into these tunes.

Speaking of traditional settings, vocalist Natasha Roth leads a quintet and sextet through two limp lounge songs, including the painfully overdone "Tea For Two." I'm not one for vocalists, so maybe softer-hearted listeners might disagree. Pianist Mark Fransman leads his group through a mid-tempo soul jam straight out of the Abdullah Ibrahim songbook and then a quirky funk/blues number. All things told, this is a mixed bag as you might expect, but you should keep an ear open for the ubiquitous Kevin Gibson and Andrew Lilley, as well as Mark Fransman. There's more to come...

Visit Sheer Sound on the web. These recordings are available from One World and other online sources.