Stitt's pyrotechnical playing on the 1946 dates, following so closely upon the heels of Charlie Parker, raises serious questions about his putative indebtedness to the legendary predecessor. 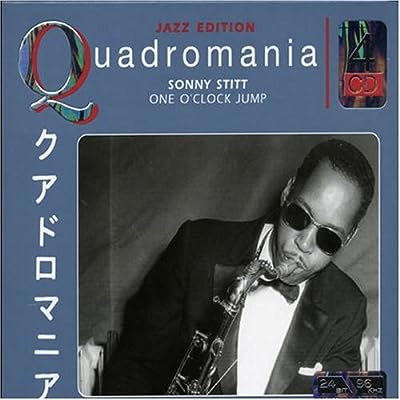 Regarded by many musicians as the prototypal, or "most perfect," saxophonist, Sonny Stitt recorded some 150 sessions under his own name. These four discs in German company Membran's Quadromania series will, with the possible exception of some recorded tenor battles 1950-52 under Gene Ammons' name, take care of most listeners' needs from late 1946 to early 1954. There are close to four hours of music with Stitt in the company of numerous founding fathers of modern jazz, or bebop: Bud Powell, Kenny Dorham, J. J. Johnson, Kenny Drew, Duke Jordan, Art Blakey, Max Roach, Kenny Clarke, Shadow Wilson, Gene Ammons, and Junior Mance. The transference, mastering, and documentation are all top-quality (no historical or biographical text, but there's ample information about Stitt on All About Jazz and elsewhere).

Since the recordings are arranged chronologically, the audio of the first disc is understandably lacking, but Stitt's pyrotechnical playing on the 1946 dates, following so closely upon the heels of Charlie Parker (Stitt recordings are available from as early as 1944), raises serious questions about his putative indebtedness to the legendary predecessor. The fidelity of the second and third discs, on the other hand, is reasonably close to present-day standards, and the playing, much of it now on tenor, is undeniably sublime.

With the exception of the fourth disc, all of the tracks were recorded prior to early 1952 and, consequently, were subject to the 3-minute time contraints of the 78-rpm format—a discipline that would prove an attribute when Stitt later began to turn in 5-6 tracks per side, each a consummate improvisation, on his popular LPs made for Roost in the 1950s and 1960s (check Complete Roost Studio Sessions for more information). Listen to what Stitt on tenor and pianist Bud Powell accomplish in as little as 2 minutes 20 seconds as they take turns on dazzling eight-bar unaccompanied intros, say all that needs to be said on their single-chorus improvisations, then follow through with bristling exchanges for another 16-32 bars before the out chorus. In terms of command of the musical language, head-spinning performances like "I Want To Be Happy" and "Fine and Dandy" would relegate most releases of the present millenium to ephemera.

On alto Stitt is more melodically structured though slightly less complex—rhythmically and harmonically—than Parker; on tenor he sounds like a more fluent, extroverted and assured version of Lester Young; on baritone sax he's so proficient that subsequent masters of the big horn should breathe a collective sigh of relief that Stitt decided against packing the instrument with any regularity. Powell demonstrates why he's generally held to be the most important, seminal pianist between Art Tatum and Bill Evans, playing close to his optimal best while serving as the primary complement to Stitt's musical voice throughout the first two discs.

The fourth disc is a 1954 live date recorded at Boston's Hi-Hat Club, with several tracks running between 6 and 12 minutes. The audio on these tracks is wanting (as it is on the original release) but not enough to disguise Stitt's enviable tone—as pure, clear, embodied, forward and present, yet soulful and "black"—as any sound in the music. His tenor playing on "S.O.S.," "Indiana," "Body And Soul" and "Jeepers Creepers" matches his agility on alto, as he alternates among all three horns on a single tune, on each instrument performing at a level defying belief let alone emulation. Listening to him bark directions (frequently to pianist Dean Earl, once this reviewer's teacher at Berklee) along with trying to process the virtuosity of his rapid- fire articulations should not cause listeners to overlook his expressive use of legato tonguings on a ballad such as "If I Had You."

Stitt and Powell may not be the omega on their instruments but they're certainly the alpha. No student of the saxophone or piano can afford to ignore either giant, and non-musicians will be no less rewarded by the music assembled on this collection. This is history in the making, a cultural landmark, an American treasure which every human being with ears and a thirst for knowledge and beauty deserves to know and experience.

Track listing: Be Bop In Pastel (Bouncing With Bud); Fools Fancy (Wail); Bombay; Ray's Idea: Serenade To A Square; Good Kick; Seven-Up; Blues In Be-Bop; Stardust; Red Shoes; Body And Soul; Ratio And Proportion; Royal Wedding; Be Bop Blues; Fine And Dandy; Third Song; Elora; Afternoon In Paris; Teapot; Blue Mode; All God's Chillun Got Rhythm; Sonnyside; Bud's Blues; Sunset; Strike Up The Band; I Want To Be Happy; Taking A Chance On Love; Fine And Dandy; Avalon; Later; Ain't Misbehavin'; Mean To Me; Stairway To The Stars; Count Every Star; Nice Work If You Can Get It; There'll Never Be Another You; Blazin'; To Think You've Chosen Me; After You've Gone; Our Very Own; 's Wonderful; Nevertheless; Jeepers Creepers; Imagination; Cherokee; Liza; Can't We Be Friends; Thrill Of Your Kiss; If The Moon Turns Green; P.S. I Love You; This Can't Be Love; Stitt's It; Cool Mambo; Blue Mambo; Sonny Sounds; Rockin At The Hi-Hat; Lover; They Can't Take That Away From Me; S.O.S. (Columbus Avenue Rhythm); Mass Ave Swing; Indiana; They Say It's Wonderful; Flyin' Home; Baritone Blues; Body And Soul; Jeeper's Creepers; If I Had You; Jumpin' With Symphony Sid; How High The Moon.

Visit Sonny Stitt at All About Jazz.