By JOHN KELMAN
November 8, 2006
Sign in to view read count 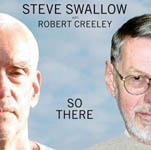 Things don't always work out according to plan. Robert Creeley, who passed away last year at the age of 78, has been a source of inspiration for bassist Steve Swallow for nearly half a century. So much so that one of Swallow's most memorable albums, Home (ECM, 1980), adapted the Guggenheim Fellowship recipient's poetry, sung by Sheila Jordan, to a small-ensemble jazz setting.

So There, a by necessity if not by design posthumous collaboration between Creeley and Swallow, is an even more intimate album that focuses on adapting the cadence of Creeley's delivery to a musical context. Swallow brings back pianist Steve Kuhn from Home but eschews a more conventional ensemble, enlisting instead the flexible Cikada String Quartet for a score that ranges from straight-ahead to abstract.

Realizing that Creeley's nuanced delivery often brought out meanings not inherent on the printed page, Swallow asked him to record a number of poems in 2001, and Creeley's choices extended beyond the romantic musings used on Home. Swallow spent the next four years woodshedding centuries of classical string quartet music, which seemed to provide a better textural fit for what he was hearing. Sadly, Creeley's passing meant he'd never have the opportunity to hear how So There would eventually turn out, but the respect Swallow pays to Creeley's rhythmic flow suggests he'd no doubt have been pleased.

This continuous performance of eighteen miniatures flows in a more structured way than Jerry Granelli's similar collaboration with writer Rinde Eckert, Sandhills Reunion (Songlines, 2004). Improvisation is a part of the picture, but Creeley's words provide a clear framework. His delivery can be staggered, as is the case on "Here Again. Kuhn's subtly expressionistic improvisations are barely anchored by Swallow's walking bass line, while the string quartet's feathery abstractions act as a dark colour that leads into Creeley's arrhythmic prose.

But Creeley also had a natural swing that Swallow exploits to great effect on the more in-the-center "Names. "Ambition swings just as comfortably, but Swallow's ability to integrate the syncopation of Creeley's spare words in its last few seconds helps demonstrate just how much consideration he put into finding just the right musical context for Creeley's words.

Swallow is, as always, an inventive improviser, and Kuhn hasn't sounded this unfettered in a long time. But what makes So There such a success is the narrative that emerges over the course of its fifty minutes. No individual component tells a story on its own, but when bass, strings, piano and voice are brought together, So There becomes a tale with a clear beginning, middle and end. It may be a work of profound understatement, but time may well prove it to be one of Swallow's most ambitious, endearing and enduring works.

Visit Steve Swallow at XtraWATT and Universal Classics on the web.