By Friedrich Kunzmann
November 9, 2019
Sign in to view read count 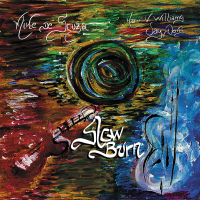 While making his way to reputation in the world of jazz guitar, British composer Mike De Souza was lucky enough to have been able to play with contemporary greats such as Terence Blanchard while receiving his education on the guitar by leading players John Parricelli and Gilad Hekselman, among others. The guitarist co-leads the young British group Big Bad Wolf, whose debut outing Pond Life (Bigbad records 2017) was released to great critical acclaim. On his debut effort under his own name, Slow Burn, de Souza continues down the path of fusing jazz language with a variety of modern approaches, as was the case on his group's debut offering. But by focusing on his guitar playing in a trio setting, he adds a more traditional jazz-fusion edge to the mix. According to de Souza, Slow Burn refers to his life-long dedication to music and practice and the different stages and genres he has crossed on the way, which seems well represented by the healthy mix of styles found on these eight original cuts.

Opener "Living with Nuns" is an immediate contender for guitar track of the year. Not only due to its heavily guitar-oriented arrangement which relies on multiple overdubs, but mostly because of the vast variety of techniques and phrasing styles de Souza impressively employs over the eight-minute exposition. Here, and on the remaining songs on the record, de Souza and his rhythm section prove of flawless chemistry and intricate interplay that is lead by ever-alternating guitar leads. The nature of the latter is in constant battle between a solo and a riff.

Between fat modern guitar effects, as prominently featured on "Nunchucks" and the opener—and a contrastingly acoustic sonic treatment—de Souza organically merges all of his influences and ideas to form a coherent set of music. During the course, the trio shows as much dexterity in instrumental execution as prowess in compositional innovation. Small details, such as the choir-like vocal layers augmenting the harmonies on "Living With Nuns" or "Going Places," have an effect that feels like the band is trying a bit too hard, but remain only minor distractions in an otherwise impressive testament to where de Souza is at musically. At times comparisons can be drawn to his peers Matthew Stevens or even Miles Okazaki, especially when focusing on guitar tone and production values of "Late for Breakfast" or closing meditation "Veritas Lux Mea." At other times his playing and approach reveal obvious parallels to his UK-contemporary Rob Luft. On the whole though, de Souza is very much doing his own thing and could follow up any of the acts mentioned, any day.

Releasing a first album is always a whole lot of pressure. The artist reveals themselves and knows that the listeners might very likely judge their entire musical persona based on merely a small glimpse of what they're about. Moving to the forefront, away from the role of a sideman, the compositional character and artistic vision plays a bigger role than ever, far beyond the instrumental skillset which is expected. Mike de Souza needn't be worried. Slow Burn is an impressive show of musical innovation and displays the guitarists knack for experimentation as much as his roots in jazz tradition, giving the listener a well-rounded picture of his virtues. In a next step, it would be interesting to hear what he comes up with in an even more minimally arranged situation—renouncing overdubs, relying only on the core band. In the meantime, there's plenty to discover here for a long while.