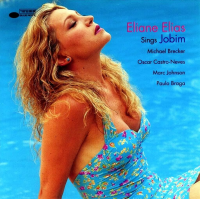 What the world needs right now is another CD of Jobim covers, right? Admit it: this isn't the most original idea ever. I am starting to lose count of how many people have covered "Desafinado, and when you consider that Eliane Elias is possessed of a paper-thin voice a la Astrud Gilberto, you have to again wonder. What is the point? Is there anything new to say here?

Well, the good news is that there is a point, and I believe there is something new to say here, and overall I was pleasantly surprised by this album. Eliane Elias brings a number of good things to her take on the songs of Jobim. As a pianist first and a singer second, she brings a romantic lyricism to many of these songs. The piano also plays more of an important role in this album than it did on, say, the '60s bossa nova classic Getz/Gilberto. Again, like Astrud Gilberto, Elias is originally from Brazil, so she brings a certain breathy cool to the Portuguese lyrics.

One strength of Elias' take on Jobim is that she avoids the obvious temptation of returning to the classic '60s sound of Getz/Gilberto. Instead, these songs sound a lot more contemporary, with Michael Brecker adding some spikier saxophone than Stan Getz's. With the exception of "Felicidade —where they seem to have let a passing samba band into the room—most of these songs are quite quiet and low key. Overall, the mood is more autumnal than the sunnier Getz/Gilberto. All said, this is a subtly addictive CD and you will want to keep coming back to it, even if you have heard some of these songs rather too often.

One issue I do have with this release is the appalling front cover, which shows Eliane Elias in a low-cut dress by a swimming pool. Come on guys, Elias is a serious artist. Is there any need for this soft-focus nonsense? I can see how it may serve marketing purposes, but give us some more credit. I would assume that most of us are here for the music, not the scantily clad woman on the front. I mean, you never saw Joao Gilberto in a pair of swimming trunks...