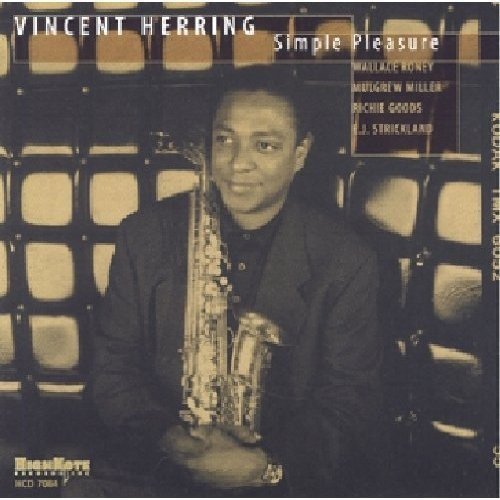 Vincent Herring's inaugural release on the High Note label boldly announces the supporting cast on the front cover. Among the cast are two very familiar "voices" of his same generation, and the three together might well be considered some of the more important players in that generation.

Indeed, this record represents an overdue reunion of three major voices who came to fruition together in the 80s, cats who moreover played on each others records and collectively worked to further develop the post-bop language of today.

In this respect this record is a summit of some major voices of the modern mainstream. Vincent Herring, Wallace Roney, and Mulgrew Miller are all respected musicians of their generation who have paid dues and are now heading into an era in which they will be increasingly looked to for leadership in the music. Are they equipped to the task?

Undoubtedly. This record shows with clarity the depth and maturity of these players. These are very self-assured, convincing and yet graceful jazz musicians and who moreover, work together in uncommon synergy. Here they are clearly listening to each other and "locking in", but more importantly it's apparent they share a common aesthetic. This is something not to be taken for granted, as it is often unclear where anybody is "coming from" when musicians are thrown together for impromptu sessions.

But for those who respect the modern mainstream and these kind of musicians, this record should prove to have a certain rarified air. As one may sense in listening, Herring, Miller, and Roney have very much the same destination in mind musically; no one needs to be led, as they all know where they are going. Furthermore, it's clear each soloist makes the attempt "only to add" to the music; there is no sort of posturing, egos talking, or lack of ultimate deference to the inherent beauty of the music here. "Simple Pleasure" is in essence- a graceful and refined recording that documents the modern mainstream as well as it could probably be documented.

With his careful selection of tunes, Vincent Herring has made this difficult task of creating a memorable mainstream record in the sea of competition, a bit easier. There is after all a rather shaded palette of material here- roughly half originals and half jazz classics or standards, but of varying tempi and varying mood. Any "feel" one might have a craving for from modern jazz, is probably met here- Herring and Co definitely thought this program through.

The opening cut: "The Loop" sets the tone well as it is a fine example of the kind of "feel" these players have excelled at in the past. It's a yearning post-Trane theme that gives way to some impassioned modal playing by both Herring and Miller. The Myron Walden composition "Once in a Lifetime" acquits the players even better as a wistful medium tempo tune which has a shifting harmony built into the accompaniment, lending momentum and bolstering Herring's alto playing on top.

Wallace Roney does not appear until the fourth cut, on which his muted playing is then featured in a haunting Eastern-sounding theme, against a plaintive Herring on soprano. To round out this set there is some true "players" bebop, and a dash of Ellington thrown in for good measure. The bop tune is Booker Little's rarely heard "Rounders' Mood"- Herring and Roney both demonstrate that while they are not mere bop-rehashers, they respect that music and can play it well. Herring's biggest feature then comes on "Sophisticated Lady" in which he waxes romantic and coaxes every last sentimental drop from his horn.

Further on, "Straight Street" is covered about as well as one could imagine with blistering Herring alto, and "There is No Greater Love" is fine ensemble work. To round out the set is "Holly's Secret". Roney totally makes his mark on this one- his ghostly reading of the theme imprints it with his signature right off. Wallace Roney is most definitely one of the most unmistakable renderers of a melody around.

This is still Herring's record though, and he plays the horn up and down, showing a more aggressive side. Herring leads an important jam session at the UpandOver in Brooklyn and here we get a glimpse of why he's such a "player's player."

It's Herring's record, but in an age when cats do not work with regular collaborators as much, I prefer to look at this record as a meeting of the minds. The reuniting of Herring, Roney, and Miller on record again is a cause for celebration in itself, and while nothing is taken away from Herring's work on alto and soprano , which is indeed heartfelt and exceptional, this record seems taken better as a document of this generation of players, rather than just Herring himself. Kudos to Herring then for not only leading the session but sensing the time was right to bring these cats back together again.

Of course I should not neglect to mention the excellent work done in support by bassist Richie Goods, and drummer E.J. Strickland. They are two impressive cats who should be very important to their generation of players, just as the vet soloists on board here are to theirs. Strickland's time is impeccable here, and Goods, well- he's got the Goods. But without their attentive support, the soloists who have been praised here relentlessly would not be able to work in such a state of grace and deliberation.

The artists on Simple Pleasure collaborate so well in fact this rec deserves a nod for best mainstream rec of the year. It's tight, swinging, and full of impressive soloing. .