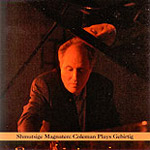 Mordechai Gebirtig was, as Anthony Coleman explained at a performance of the composer's work at The Stone in February, a writer of Polish folk songs evoking the hardships of Jewish life in the '30s and '40s. More a poet than a musician, Gebirtig would often sing or hum melodies to others to score. Coleman has given programs of Gebirtig's work at festivals in New York and Europe, and he broke out the songbook again at The Stone.

He's such a strong interpreter and arranger that it's hard to tell where the composer ends and he begins. Some pieces on this solo piano disc receive what seems to be a straight reading, others get a ragtime interpretation that may or may not have been in Gebirtig's vocabulary. But the most striking of the ten pieces here are clearly very much Coleman. With preparations to the piano strings, Coleman creates buzzes and metallic voices within the case to haunting effect. With titles like "Hulyet, Huylet, Kinderlekh ("Rejoice, Make Merry, Children") and "S'Brent ("Our Town is Burning"), Gebirtig clearly approached a range of subject matter, and Coleman's interpretations serve to intensify the joys and sorrows of the compositions.

Shmutsige Magnaten was recorded in a synagogue during a midnight concert at the 2005 Jewish Culture Festival in Krakow, and the sound is more evocative than audiophilic. Reverberating and a bit thin, close-miked enough to hear Coleman release the pedals at the end of a piece, the record fits the material well. One almost wishes post-production pops and surface noise had been added, as if—like the scarce, surviving Gebirtig scores—it were a lost document from decades past.