By DAN MCCLENAGHAN
February 1, 2008
Sign in to view read count 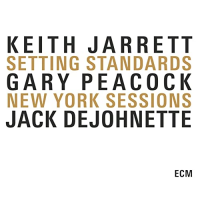 The surprise for the folks who haven't followed the quarter century span of Keith Jarrett's Standard Trio—those who jumped onboard with, say, Live at the Blue Note (ECM, 1995), or Up For It (ECM, 2003)—will be just how good these guys were right from the very start. Things just seemed to click into place on their first trip to the studio in 1983, when Jarrett, bassist Gary Peacock and drummer Jack DeJohnette went into Power Station in New York to record an album.

To Jarrett's fans at the time, this must have seemed an oddly backward-looking decision—to record an album of standards, familiar tunes from the Great American Songbook. Mention the idea of a piano trio—especially with these three artists, who had all engaged themselves in adventurous outings—playing "The Meaning of the Blues," "God Bless the Child," "It Never Entered My Mind," "If I Should Lose You," and the tag "retro" (meant not in a complimentary manner) can come up.

But a good melody never goes out of style; and when the musicians can inject some energy and inspiration into the familiar, magic can happen, as it did at Power Station that day in 1983, when enough material for three albums was laid down. Setting Standards: New York Sessions collects those three individually released albums—Standards, Volume 1; Standards, Volume 2 and Changes in one three-disc box set.

Like no other group except the trios of Bill Evans, Jarrett, Peacock and DeJohnette's approach is one that transcends the standards that they play. They get inside melodies then take them somewhere else with a rare gusto, on improvisational forays that remain threaded to the spirits of the originals.

The first two discs are the templates for much that the group has recorded in the subsequent quarter century. They have, of course, evolved. It is a wondrous progression from the relatively reverent "It Never Entered My Mind," on Standards, Volume 1, to the near-religious ecstasy of the very extended "Autumn Leaves" from Live at the Blue Note, Set 1 and the slightly (but beautifully) warped, Zen-like reading of "My Foolish Heart" from the 2007 ECM set of the same name. That said, had this trio never recorded another album together, the three albums contained in Setting Standards would still be considered classics.

The box set's third disc, Changes, departs from the standards format, with three extended Jarrett compositions that take the group into improvisational territory that has much in common with Jarrett's fabled solo piano recordings.

Setting Standards, the box set that contains the music made at the birth of the Standards Trio, is handsomely packaged, and includes a booklet with session photos and informative liner notes by Peter Ruedi. Put this one on the "Reissue of the Year" list.

CD1 (Standards, Vol. 1): Meaning Of The Blues; All The Things You Are; It Never Entered My Mind; The Masquerade Is Over; God Bless the Child.