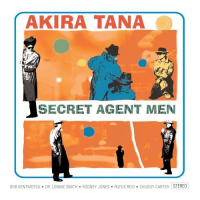 Sure, it's kitschy and gimmicky and a bit predictable, but Secret Agent Men, veteran drummer Akira Tana's treatment of real and imagined movie themes, works for one simple reason - it grooves like hell! And with ringers like Dr. Lonnie Smith at the B-3, Rodney Jones on guitar, and Tana's frequent collaborator Rufus Reid on bass, what else would you expect?

The ensemble - which also includes Bob Kenmotsu on saxophones and Chuggy Carter on percussion - offers down and dirty reinterpretations of mostly familiar TV and film themes from the '50s through the '80s like the title tune, "Mission Impossible," "In the Heat of the Night," and "From Russia With Love." They also include a handful of original compositions written in the same cinematic spy vs. spy vein.

The concept, cute as it is, might wear thin in the hands of lesser musicians. But Tana, Reid and Co. have the chops and the imagination to elevate the material above the norm, and the good sense to have fun with a fun idea.