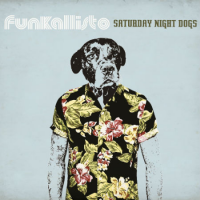 Italian funk band, Funkallisto, comes from Rome's Trastevere neighborhood, a fascinating maze of medieval streets along the Tiber. I originally got turned onto these Roman funkateers because of their smoking cover version of Willie Bobo's Latin funk classic, "Broasted Or Fried." Influenced by the great funk bands of the 1970s, Funkallisto keeps to those roots as they carry the funk torch in Italy.

Their 2017 album, Saturday Night Dogs, is the band's best record to date. You can tell they put a lot of heart & soul power into making this one. When in Rome...make it funky!

"Take A Little Time" is the only song on Saturday Night Dogs with full lyrics. Jess Roberts sings a super soulful song with a positive message. The organ vibe gives it a greasy, early 70s feel.

"Rhythm" is exactly what it says it is. In this tune the rhythm section gets to show off. Powerful percussion, tight drumming, and a dope bass line hold down the groove for the horns to soar.

"The Devil" begins with super funky guitar, syncopated cymbals, and fiery horn lines. Listen for the heavy breakdown on drums just after the halfway mark. Hot horns jump back on the groove, and the wah-wah flows throughout.

"Marcelito el Tropicano" captures the band's sensational energy. The tune oscillates between a mellow jazz groove and exhilarating Latin funk. The percussion shines, the electric piano dances on top of the beat, and the impressive horns astonish alongside electrifying funk guitar playing, and proper drumming.

"Fatebenefratelli" arouses even the most devoid-of-funk folks because of its electrifying rhythm & impelling groove. This tune is totally irresistible, and must get people on the dance floor instantly at Funkallisto's live shows.

"Darkalabro" ends the album with an extended jam. It's got a jazzy Afrobeat vibe, and genre-bending funk demeanor. I love it because it's too cool to categorize, and impossible not to dig.

Funkallisto is the dopest funk band in The Eternal City! Their 2017 record, Saturday Night Dogs, is fabulously funky all the way through. Listen to more of their music, and hopefully catch them live in Rome.