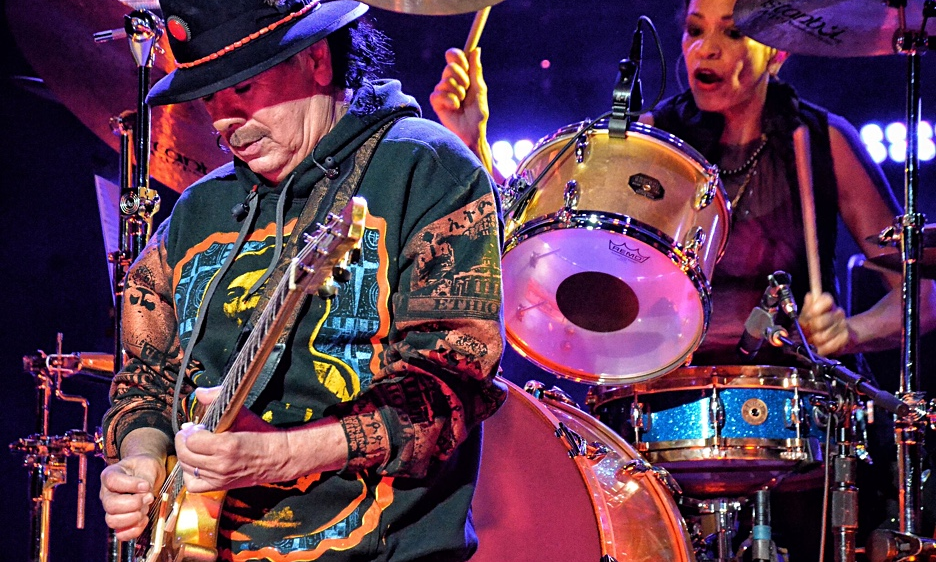 Carlos Santana is a 10-time Grammy Award-winning musical legend. The Mexican-American guitarist and songwriter formed his eponymously named band in San Francisco in 1966. Over the years, the band has undergone numerous lineup changes. Carlos Santana is the only constant member. Success came early to Santana. The guitarist and band cemented its place in history with its appearance at the iconic Woodstock music festival in 1969. The group's first three Columbia Records albums Santana (1969), Abraxas (1970), and Santana III (1971) are considered classics.

Santana's sound is a mixture of jazz fusion, jamband rock, pop, folk, funk, blues, R&B and, of course, Latin music. During his career Santana and his band have released over two dozen albums and is listed as one of the best-selling groups of all time with over 43 million albums sold the U.S., and an estimated 100 million sold across the globe. In 1998, the "classic" line-up of Santana (Gregg Rolie, Mike Carabello, Michael Shrieve, David Brown, José Areas and, of course, Carlos Santana) were inducted into the Rock 'N' Roll Hall of Fame. In 2000, the band won six Grammy Awards in one night, a record tied with Michael Jackson, and three Latin Grammy Awards.

The Doobie Brothers were formed in California in 1969 after the band called Pud disbanded. Guitarist/vocalist Tom Johnston began jamming with guitarist Patrick Simmons and the guitarists decided to form the group that is now known as the Doobie Brothers. By 1971 the band had signed with Warner Brothers Records and released its eponymously titled debut album. During the past 45 years, the group, like Santana, has featured a staggering number of official members (including Jeff "Skunk" Baxter, Tiran Porter, Keith Knudsen, the late Mike Hossack and Michael McDonald) and an even larger number of unofficial members.

On a cool late-August Sunday evening at Jones Beach, Santana and the Doobie Brothers treated an enthusiastic Long Island audience to a wonderful night of good time music. The Doobie Brothers were on first and did not disappoint. The band stormed the stage with a ferocious version of "Rockin' Down The Highway" and continued with a strong 11-song main set that included: "Take Me In Your Arms (Rock Me A Little While)" featuring Russo on sax, "Maxine," "Eyes of Silver" and an amazing version of "Takin' It To The Streets." The main set concluded with the one-two-three rockin' knockout combination of "Jesus Is Just Alright," "Long Train Runnin'" and "China Grove." The encores of "Black Water" and a bigger-than-life version of "Listen To The Music" showed a band that was not only firing on all cylinders but having a blast while providing its enthusiastic fans with a chance to sing along with their heroes.

After a sort intermission, Santana took the stage. The large band featured ten musicians: 72-year-old Carlos Santana on lead guitar; his wife, Cindy Blackman Santana on the drums; his son, Salvador Santana on keyboards and vocals; Andy Vargas on vocals; Benny Rietveld on bass; David K. Mathews on keyboards; Karl Perazzo on percussion; Paoli Mejías on percussion; Ray Greene on vocals, trombone and other instruments and Tommy Anthony on guitar and vocals. These virtuoso musicians delivered a two-hour performance that featured a mix of English and Spanish singing as the music touched on and blended a vast mixture of genres and styles including (but not limited to) rock, jazz, pop, Latin, calypso, hip-hop and rap.

The show began as most Santana shows do with "Soul Sacrifice" followed by "Jingo." The evening's third tune, "Evil Ways," got the fans on their feet and dancing in the aisles. This version of the tune was infused with John Coltrane's "A Love Supreme."

Following "Toussaint L'Ouverture," the Doobie Brothers appeared on stage and along with Santana and his band performed a tour de force version of "Some Kind of Wonderful" during which each musician had his or her moment to shine. Carlos Santana summed up the song's performance and The Supernatural Tour (of which this evening's performance was the finale) by stating, "We are ever so grateful for this glorious experience— sharing light, love and music with the magnanimous Doobie Brothers, and we deeply honor being in your presence. Thank you!"

The music was intoxicating and its sultry Latin atmosphere warmed the crowd (even if the temperatures at the intimate venue by the bay plummeted to the mid-sixtes as the winds picked up and were cooled by the wide-open spaces and sea water). Salvador Santana took a solo and delivered a nice touch of rap and hip-hop which added a very contemporary vibe to the evening. Other highlights included "Breaking Down The Door" (from Africa Speaks,, which was released in June 2019 on Concord/Suretone Records), "Lamento," "Black Magic Woman" which segued into "Gypsy Queen" and Tito Puente's "Oye Como Va," which received a standing ovation. During "Put Your Lights On" (featuring Greene singing the vocals originally recorded by Everlast), the audience members pooled the collective powers of their cellphones to light the entire venue.

Santana and his band members clearly loved every minute of the evening. With the audience members eating out of its hands, the band jammed the night away, extending some songs and thus allowing Carlos Santana to deliver awe-inspiring solos on which his hands moved so fast across the fretboard that it had to be seen (and heard) to be believed. As the evening moved forward, the multi-cultural and multi-generational audience continued to dance and sing along to virtually every tune, most notably "Corazón Espinado" and "Maria, Maria."

Following "Maria, Maria," the band took a moment and then it was time for the encores. Because the performance was billed as The Supernatural Tour, it should have surprised no-one that Santana saved the biggest hit from the 1999 CD, "Smooth" (during which the fans danced and sang along to with a rabid fervor that is rarely seen), for the encores. What was a pleasant surprise was the fact that it was sandwiched among the Chambers Brothers' "Are You Ready" (which featured a prolonged and fantastic drum solo by Cindy Blackman Santana) and the '60s classics, "Love, Peace and Happiness" (another Chambers Brothers tune) and the Youngbloods' "Get Together." The message was clear—Love one another right now.

The combination of Santana and the Doobie Brothers provided an excellent opportunity for the Long Island music fans to enjoy a high-energy performance that was nostalgic while looking toward a better future.